WFP/Martin Penner
Displaced by fighting, these women queue up for food vouchers in the village of Minova, in Eastern DRC.

15 February 2013
The United Nations food relief agency today said it will fly in 20 metric tons of emergency food supplies to recently displaced persons in the town of Punia in the Democratic Republic of the Congo (DRC), one of the hardest areas to reach in the eastern part of the country.

The United Nations food relief agency today said it will fly in 20 metric tons of emergency food supplies to recently displaced persons in the town of Punia in the Democratic Republic of the Congo (DRC), one of the hardest areas to reach in the eastern part of the country.

“Bringing food assistance to Punia is costly and also poses an immense logistical challenge,” says the World Food Programme (WFP) Country Director in DRC, Martin Ohlsen. “Even after airlifting the food in, there’s no proper storage facility at the airstrip and the road to Punia town is an 18 kilometre-long muddy track. For transport, we have to rely on two ancient rusty trucks.”

Punia is an isolated town in the Maniema province. Aircraft is currently the only method available to bring food supplies to the area as heavy rains have made the unpaved roads impassable for large transport trucks, which is the usual delivery method used by WFP over long distances.

The food supplies, which were airlifted from Goma over the past two days, will feed some of the 40,000 people who have fled their homes in recent weeks to escape fighting between Mai Mai rebels and units of the Congolese army over a mining area on the borders of the North Kivu and Maniema provinces. Most are living with host families who have limited resources themselves.

“We’ll be working with community leaders to help the most vulnerable who are terrified after fleeing with just their clothes and some household belongings,” said the head of the programme unit at WFP’s regional office in Goma, Jean Pierre Mambounou. “With 20 tons of food, we can feed 8,000 people for five days.”

Distributions will start tomorrow with high-energy biscuits, which are nutritious and light to transport, WFP said in a news release.

Concurrent crises are affecting the five provinces of eastern DRC where different armed groups are fighting to expand their zones of control. According to latest figures from the UN Office for the Coordination of Humanitarian Affairs (OCHA), there are some 2.6 million internally displaced persons (IDPs) across the vast African country. Of these, some 163,000 are located in Maniema.

In spite of the lack of security, poor road infrastructure, long distances and high transport costs, WFP has distributed nearly 800,000 two-week food rations to IDPs of eastern DRC’s five provinces between the launch of its emergency operation in September 2012 and the end of last month.

A previous airlift of 42 metric tons of food supplies in Maniema province took place early last month, and WFP said it is planning another one to reach more of those in need, but is currently lacking funds to carry out the operation. Some $3.9 million are needed to assist all IDPs in eastern DRC over the next five months, the agency said. 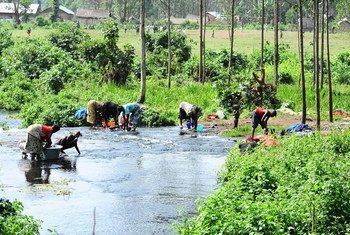 17 January 2013
The United Nations and its partners are appealing for $30.5 million to assist some 59,000 people who have been affected by the recent fighting in the Democratic Republic of the Congo’s (DRC) eastern province of North Kivu.