2 December 2013
A United Nations independent rights expert called today for policy changes that will allow developing countries the freedom to use their reserves to help secure the right to food without the threat of sanctions under current World Trade Organization (WTO) rules.

A United Nations independent rights expert called today for policy changes that will allow developing countries the freedom to use their reserves to help secure the right to food without the threat of sanctions under current World Trade Organization (WTO) rules.

“Trade rules must be shaped around the food security policies that developing countries need, rather than policies having to tiptoe around WTO rules,” said Olivier De Schutter, Special Rapporteur on the right to food.

His call comes on the eve of a high-level WTO summit in Bali, Indonesia, which opens tomorrow and runs through 6 December, which will try to reach agreement on proposals on developing countries’ food stockholding for food security, as part of the Doha Round trade negotiations.

“The Bali package should now enshrine the rights of developing countries to use public food reserves for food security without facing sanctions,” he underlined.

“Supporting local food production is the first building block on the road to realizing the right to food, and trade must complement local production, not justify its abandonment,” the expert said, warning that food security is at high risk when countries become overly dependent on global markets, as shown during the global food crisis of 2007-08.

“They must develop ambitious and innovative food security policies that support their own production base, building on successful experiences in a growing number of countries,” he said.

“Food reserves are a crucial tool, not just in humanitarian crises, but in the everyday struggle to provide stable income to farmers and to ensure a steady flow of affordable foodstuffs for poor consumers, many of whom lack a basic social safety net,” Mr. De Schutter said.

The ‘Comprehensive Framework for Action’ of the UN Secretary-General’s High-Level Task Force on the Global Food Security Crisis, which includes the WTO secretariat, has called on States to use strategic grain reserves to stabilize prices and to immediately review trade policy options and their impacts on poor consumers and farmers.

India’s 2013 Food Security Bill mandates public procurement of foodstuffs in order to distribute subsidized grains to much of the population, combined with a minimum support price to ensure adequate incomes for farmers. This has raised concerns that India could breach the tight limits on ‘trade-distorting support’ applied to developing countries under current WTO rules.

The G33 group of developing countries has proposed exempting public stockholding aimed at supporting low-income or resource-poor producers from being considered as a trade-distorting subsidy, as part of an ‘early harvest’ of Doha Round outcomes. A ‘peace clause’ has meanwhile emerged as a means of exempting such schemes from WTO challenges for a given period.

“The risks of trade distortions must not be exaggerated,” Mr. De Schutter said, insisting that any agreement in Bali must give developing countries sufficient guarantees to be able to push ahead with ambitious food security policies. He noted that the Indian Food Security Bill is aimed at stocks for domestic distribution rather than export onto world markets.

For the Special Rapporteur, the solution is not to block any such policies, even though close monitoring is required to ensure that stockholding in one country does not result in dumping on other developing world markets.

“It should not be forgotten that developed countries are able to subsidize their farmers to the tune of more than $400 billion per year without breaching WTO rules,” he said. “Support must also be allowed to reach smallholders in developing countries.”

Recalling the conclusions of his 2011 report on the WTO and food security, which highlighted the potential tension between stockholding for food security purposes and WTO disciplines, the UN expert outlined a series of additional flexibilities that developing countries need in order to reconcile food security and free trade.

“Temporary import restrictions, active marketing boards, and safety-net insurance schemes must all be part of the toolbox,” said Mr. De Schutter, adding that even if certain policies are not disallowed, they are certainly discouraged by the complexity of the current rules and the threat of legal action.

“In Bali and beyond, we must work to enshrine these flexibilities, and must continue to ask what kind of trade rules will allow us to combat food insecurity and realize the human right to food,” the Special Rapporteur stressed. 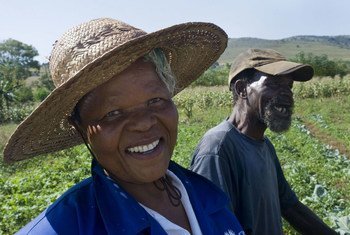 22 November 2013
The United Nations today launched the International Year of Family Farming (2014) in an effort to highlight the potential family farmers have to eradicate hunger, preserve natural resources and promote sustainable development.