FAO/Rodger Bosch
A farmer and his wife working in a vegetable plot irrigated by water from the Mpatheni Dam in Swaziland.

22 November 2013
The United Nations today launched the International Year of Family Farming (2014) in an effort to highlight the potential family farmers have to eradicate hunger, preserve natural resources and promote sustainable development.

There are an estimated 500 million family farms – those that rely primarily on family members for labour and management – across the developed and developing world, according to the UN Food and Agriculture Organization (FAO).

These farms produce the food that feeds billions of people, the agency noted in a news release, adding that in many developing countries, family farms represent up to 80 per cent of all farm holdings.

“By choosing to celebrate this year, we recognize that family farmers are leading figures in responding to the double urgency the world faces today: improving food security and preserving the natural resources,” FAO Director-General José Graziano da Silva stated at the launch, which was held at UN Headquarters in New York.

Speaking on behalf of FAO, which is the lead UN agency for the year, the International Fund for Agricultural Development (IFAD) and the World Food Programme (WFP), he added that it is encouraging to see that family farming is still the main food provider for billions of children, women and men.

“But strangely enough, they are among the world’s most vulnerable populations,” he noted.

Secretary-General Ban Ki-moon, in a message delivered at the launch by Assistant Secretary-General for Economic and Social Affairs Thomas Gass, said that the year calls for commitments from every stakeholder.

“Governments can empower family farmers, especially women and youth, by creating policies conducive to equitable and sustainable rural development. Private investors can ensure accountability and social and environmental responsibility throughout the value chain from farm to fork. Too much food is lost after harvest because small-scale producers aren’t able to store, process and transport their goods.

“Agricultural research and extension agencies and the knowledge community can tailor appropriate technologies for family farmers, and family farmers’ organizations, cooperatives and civil society as a whole can strengthen their role in promoting dialogue on this important issue,” he added.

“Together, let us use this International Year to reposition family farming as a central tool for sustainable development.”

During the launch, special ambassadors were designated for the year, including Ibrahim Coulibaly, President of the National Coordination of Peasant Organizations of Mali; Mirna Cunningham of Nicaragua, former Chair of the UN Permanent Forum on Indigenous Issues; and Gerd Sonnleitner of Germany, President of the European Farmers Association. 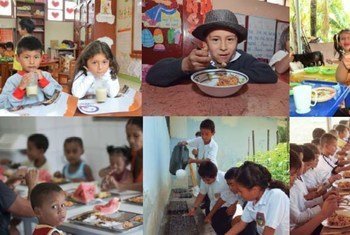