ILO
There are still over 11 million women in slavery around the world. We need to take action and #EndSlaveryNow!

2 December 2013
Top United Nations officials marked the International Day for the Abolition of Slavery today with a call for concerted action to eradicate the contemporary forms of this heinous practice.

“It is vital that we give special consideration to ending modern-day slavery and servitude which affects the poorest, most socially excluded groups – including migrants, women, discriminated ethnic groups, minorities and indigenous peoples,” Secretary-General Ban Ki-moon said in his message for the Day, observed annually on 2 December.

The International Day marks the date in 1949 of the adoption by the General Assembly of the UN Convention for the Suppression of the Traffic in Persons and of the Exploitation of the Prostitution of Others. The focus of the day is on eradicating contemporary forms of slavery, such as trafficking in persons, sexual exploitation, the worst forms of child labour, forced marriage and the forced recruitment of children for use in armed conflict.

Today, 21 million women, men and children are trapped in slavery all over the world, according to the UN International Labour Organization (ILO), which has teamed up with prominent artists, athletes and advocates in its campaign to “End Slavery Now.”

Mr. Ban noted that there has been important progress in the last year, including stronger legislation and greater coordination by a number of countries to combat slavery. Also, more and more businesses are working to ensure their activities do not cause or contribute to contemporary forms of slavery in the workplace and their supply chains.

“I strongly support these initiatives and urge all Member States to ratify the Supplementary Convention on the Abolition of Slavery, develop robust and effective domestic legislation and boost enforcement on the ground. The partnership of the private sector in implementing these efforts is critical,” said the Secretary-General.

He also urged continued support for the UN Voluntary Trust Fund on Contemporary Forms of Slavery, which has helped restore human rights and dignity to tens of thousands of children, women and men for over 20 years, he said.

General Assembly President John Ashe said in his message that the Day serves as a reminder to all people that, much like its historical antecedent, modern slavery is an egregious violation of a person’s basic human rights. “The majority of those who suffer are the most vulnerable and marginalized in society,” he stated.

“Each year, hundreds of thousands of men, women and children are kidnapped and sold into bondage across international borders. Trafficking in persons is an issue of great global concern and affects almost all countries,” Mr. Ashe noted.

He called on Member States to eradicate slavery in all its forms; to boost initiatives that promote social inclusion; and to end all forms of discrimination. “We must promote and protect the rights of those most vulnerable within our societies, and help to restore the dignity of victims of slavery.”

In a related development, the UN Special Rapporteur on contemporary forms of slavery, Gulnara Shahinian, has called for urgent and effective action to end slavery and child labour in Ghana, noting that further progress can only be achieved by addressing the root causes sustaining these practices, including poverty, regional disparities and the lack of access to livelihoods, education and health.

During a nine-day mission to the country, Ms. Shahinian saw that child labour, including in its worst forms, continues to thrive in some communities. “Children, some as young as four years of age, continue to be sent to fishing communities where they do dangerous work, are deprived of an education and are not paid,” she noted in a news release.

While hailing the steps taken by some of these fishing communities to ban child labour in their villages, she said more community awareness raising and livelihoods are needed. Children also work in hazardous and slavery conditions in the artisan mining and cocoa sectors, though the latter has seen significant improvements, she added.

The expert also spoke with girls engaged in survival and commercial sex and who are regularly exposed to rape, exploitation and abuse. Domestic servitude, often involving young children is another form of contemporary slavery which is believed to be rampant and must be studied and addressed, she stated. 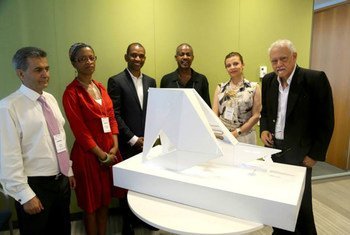 23 September 2013
A Manhattan-based architect of Haitian descent was today announced as the winner of an international competition to design a memorial that will be permanently on display at United Nations Headquarters in New York to honour victims of slavery and the transatlantic slave trade.