29 November 2013
Now that Viet Nam has made great strides in economic development, it is time to increase opportunities for public debate and better protect ethnic, artistic and academic freedom of expression, an independent United Nations human rights expert said today.

“Viet Nam finds itself at an important juncture,” Farida Shaheed, UN Special Rapporteur on cultural rights, said at the end of a 12-day mission to the South-east Asian country.

“It is time that the impressive progress made in reducing poverty and ensuring economic development is complemented by an increased space for public debate and the expression of a plurality of voices as the country moves forward,” she stressed.

She also urged the Government “to significantly increase its efforts to map and mitigate the negative effects of development schemes so that the country can fully benefit from the strength of the varied cultures of its peoples to promote sustainable development.”

While tourism has provided a supplementary source of livelihood to local people, they are not the primary beneficiaries of the revenue generated, she said.

“Measures are needed to ensure that the people whose cultural heritage is being used to promote tourism are empowered to manage these activities to their best advantage,” Ms. Shaheed said, citing the situation in Sa Pa, one of the locations she visited.

“People should not be obliged to perform rather than live their own cultures,” she said.

On academic freedoms, she expressed concern over the absence of private publishing houses as well as the use of a single history textbook in schools, underscoring the need to promote critical thought, analytic learning and debate.

She said she was also deeply concerned about surveillance and conviction of artists under a law that forbids “conducting propaganda against the Socialist Republic of Viet Nam.”

“I sincerely hope that the Government would review its policy to ensure greater freedom of artistic expression and creativity, in accordance with international standards,” the expert said.

During her mission, Ms. Shaheed visited cities and villages around the country, meeting with State authorities as well as artists, academics, representatives of civil society, members of ethnic communities and people involved in the tourism industry.

Special Rapporteurs are independent, unpaid experts who report to the UN Human Rights Council in Geneva. Ms. Shaheed will present a comprehensive report to that body with her findings and recommendations on Viet Nam in 2014. 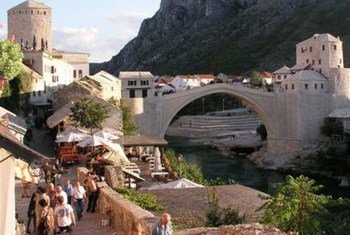