Mali: UN mission calls for restraint, return to negotiations after clash in Kidal

UNHCR/H. Caux
A Malian refugee woman in Mangaize, northern Niger. Many Malians have fled to neighbouring countries because of the general insecurity and humanitarian situation in the country's north.
29 November 2013

The United Nations peacekeeping mission in Mali today strongly condemned the latest violence in Kidal, in the northern part of the country, and called for restraint.

The UN Multidimensional Integrated Stabilization Mission in Mali (MINUSMA) said that “incidents of a serious nature” took place yesterday despite a security plan coordinated by the Government in cooperation with the UN Mission and support from the French security mission in Mali, known as Serval.

“MINUSMA, in close cooperation with Serval, assisted the evacuation of three of the injured for medical care in Gao,” the Mission said in a statement.

The violence broke out ahead of the planned arrival of Prime Minister Oumar Tatam Ly and a Government delegation to Kidal.

Since early 2012, the country has witnessed a military coup d’état, renewed fighting between Government forces and Tuareg rebels, and the seizure of its northern territory by radical Islamists.

In April, the Security Council approved a 12,600-strong MINUSMA, authorizing the blue helmets “to use all necessary means” to carry out security-related stabilization tasks, protect civilians, UN staff and cultural artefacts, and create the conditions for provision of humanitarian aid. 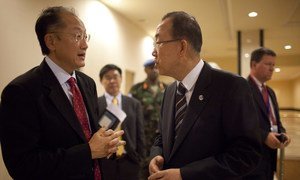 “We are here for you,” Secretary-General Ban Ki-moon told people of the Sahel today, kicking off a visit to the region with international development leaders to listen to local priorities and to link political, security, development and humanitarian efforts there.