5 November 2013
“We are here for you,” Secretary-General Ban Ki-moon told people of the Sahel today, kicking off a visit to the region with international development leaders to listen to local priorities and to link political, security, development and humanitarian efforts there.

“We have partnered together in this extraordinary way because we recognize that the Sahel region needs an extraordinary effort,” Mr. Ban told the opening of Meeting on the Sahel in Bamako, Mali, presided over by President Ibrahim Boubacar Keita.

“We need an approach that breaks down institutional barriers and joins-up political, security, development and humanitarian efforts throughout the region. Now is the time for action,” the Secretary-General urged.

“The joint visit of our five institutions is a symbol of our commitment,” he told the ministerial gathering. “We are here to express our solidarity through words and to show it through action.”

The World Bank Group has pledged $1.5 billion in new regional investments over the next two years, in additional to significant country programmes, while the European Union (EU) has announced it will provide €5 billion ($6.75 billion) to six countries over the next seven years.

The Sahel stretches from Mauritania to Eritrea, including countries such as Burkina Faso, Chad, Mali, Niger, and Senegal, a belt dividing the Sahara desert and the savannahs to the south.

More than 11 million people are at risk of hunger and 5 million children under five are at risk of acute malnutrition in the Sahel, which has undergone three major droughts in less than a decade.

In addition, political instability and unconstitutional changes in Governments have had significant economic and social consequences in the region, which is also threatened by terrorist acts and organized crime.

During today’s meeting, participants discussed the UN Integrated Strategy for the Sahel, which had been spearheaded by Romano Prodi, Mr. Ban’s Special Envoy for the region, who is also part of the UN delegation.

Endorsed by the Security Council, the framework guides the Organization’s collective efforts in capacity building to address resilience, cross-border threats and inclusive governance

Mr. Ban stated that the challenges of the region respect no borders and neither should the solutions: “That is why we have launched a strategy to connect our efforts across issues and the region as a whole.”

During the regional meeting, President Keita called for a minute of silence in memory of Ghislaine Dupont and Claude Verlon, the two French journalists abducted and executed in northern Mali on Saturday.

The Security Council and the UN Scientific, Educational and Cultural Organization (UNESCO) condemned the attacks in the strongest terms and appealed to the Government to bring the perpetrators to justice.

Also today, Mr. Ban, along with Dr. Kim, the AU’s Nkosazana Dlamini-Zuma, Donald Kaberuka of the ADB, and the EU’s Andris Piebalgs, met with President Keita on the sidelines of the Ministerial Meeting. A representative of the Secretary-General of the Organisation of Islamic Cooperation (OIC) also participated.

Mr. Ban welcomed the important progress made in the last year with the signature of the Ouagadougou Preliminary Agreement and the successful holding of presidential elections.

“These are the first steps on the long road to peace and stability,” Mr. Ban said, according to his spokesperson.

The discussions noted the importance of addressing the root causes of the crisis through improved governance, the protection of human rights and the extension of state authority throughout the country.

Mr. Ban also underscored the need for an inclusive national dialogue and reconciliation and an inclusive approach to the upcoming legislative elections.

The Secretary-General reassured the President of his commitment to reinforce the capacity of the UN Mission in Mali (MINUSMA), led by Bert Koenders, in order for the Mission to fulfil its mandate.

Mr. Ban and the delegations will continue their visit to Niger, Burkina Faso and Chad.

This is the second joint visit by the heads of the UN and the World Bank to Africa in six months.

In May, Mr. Ban and Dr. Kim travelled to the Great Lakes region, drawing attention to the same issue of promoting both peace and development. 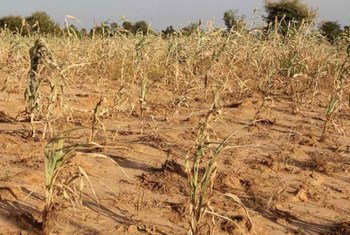 4 November 2013
Global leaders have pledged over $8 billion to boost economic growth in the Sahel region of West Africa as they begin a United Nations-led visit to an area that has suffered for decades from devastating poverty, hunger and instability.