OCHA/Eman Al-Awami
The humanitarian crisis particularly affects the most vulnerable which includes the elderly, children, women and the disabled, many of whom rely entirely on humanitarian assistance.

27 November 2013
Back from a visit to northern Yemen where an armed conflict is entering its sixth week, a senior United Nations humanitarian official has called for access to thousands of internally displaced people – some in need to emergency medical care.

“I am alarmed that humanitarian workers cannot reach thousands of civilians in Dammaj and Kitaf who are in need of urgent assistance,” Ould Cheikh Ahmed said.

Dammaj, located in the province of Sa’ada, has been the centre of clashes between Houthi and Salafi armed groups for the past several weeks, which has recently escalated, resulting in dozens killed and injured, and overall affecting up to 29,000 people.

A blockade of the main roads going into Sa’ada is preventing fuel, food, medical supplies and other necessities from reaching the people there. The blockade has also cut off access for humanitarian workers wanting to reach Al Mazraq internally displaced persons (IDP) camps in Hajjah Governorate.

The province is facing acute fuel shortages, which is also impacting water access to the communities which rely on water pumps.

The Office for the Coordination of Humanitarian Affairs (OCHA) said it is also concerned about rapidly rising food prices.

“The situation could trigger a new humanitarian crisis in northern Yemen,” the Humanitarian Coordinator warned.

He urged the parties to the fighting in northern Yemen “to seek a peaceful resolution to their ongoing conflict, respect the right to protection of civilians and observe their legal obligations in situations of conflict.”

“Humanitarian partners stand ready to respond quickly to the evolving crisis there, but cannot do so until they are granted immediate, unrestricted and unconditional access,” Mr. Ahmed said.

Yemen has been undergoing a democratic transition, with a Government of National Unity, which came to power in an election in February 2012 following protests that led to the resignation of former President Ali Abdullah Saleh.

Currently some 13 million people – more than half the entire population – require some form of humanitarian aid. 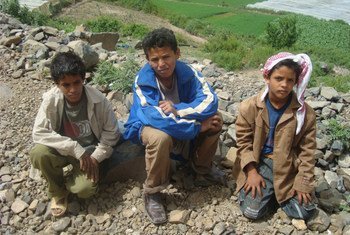 4 November 2013
A senior United Nations official in Yemen has helped to broker an agreement to allow in medical and other supplies, and to evacuate the wounded from the northern part of the country, which has experience escalating violence, it was announced today.