WHO
Under the direction of the Philippine Department of Health, representatives from WHO, UNICEF and 23 international partners discuss the upcoming vaccination campaign in Tacloban.

27 November 2013
A mass campaign to vaccinate children in Tacloban – the Philippine city hardest hit by Typhoon Haiyan – has begun in evacuation centres and in communities using mobile health teams with support from United Nations agencies.

The Philippine Department of Health, backed by the UN Children’s Fund (UNICEF), the UN World Health Organization (WHO) and partners, plans to vaccinate more than 30,000 children under five years of age against polio and measles. They also received Vitamin A drops to help boost their immune systems.

“Disease is a silent predator, but we know how to prevent it and we will do everything that we can,” said Angela Kearney, UNICEF Coordinator for the Emergency Response in Tacloban.

UN staff carried supplies by hand from the capital, Manila, to Tacloban, coordinated teams to give the vaccines and trained them on how to do it under these difficult circumstances.

“It is virtually unprecedented that within two and a half weeks of a disaster of this scale, with this level of devastation and these logistical challenges, that a mass vaccination campaign is already rolling out,” said Dr. Julie Hall, WHO Representative in the Philippines.

The first phase that began yesterday is part of a wider campaign aimed at strengthening the health of young children in typhoon-affected areas.

Meanwhile, the UN Food and Agriculture Organization (FAO) is warning that without immediate assistance for Philippine farmers, the country faces a double tragedy.

The agency today called on the donor community to urgently provide more than $11 million to help rural communities clean and clear agricultural land and de-silt irrigation canals in the typhoon-aftermath.

This call is in addition to the $20 million already requested by FAO to help typhoon-affected farmers plant, fertilize, irrigate and maintain crops to ensure the next harvests in 2014.

“We are in a race against time,” said Rodrigue Vinet, Senior Officer in charge of FAO’s programme in the Philippines. “There is an immediate need for resources to help farmers clear their land and plant their crops. Therefore, we need to make the required purchases now and provide substantial resources directly to farmers to help them through this period.”

The Philippine Department of Agriculture has also requested that FAO support this cash-for-work scheme, covering more than 150,000 hectares and some 80 kilometres of communal irrigation canals.

Food is still a priority in the country three weeks after the typhoon hit, killing over 5,230 people and affecting more than 13 million others, nearly 3.5 million of them left homeless.

Meanwhile, the deadly disaster in the Philippines and the increasing frequency of natural disasters is the focus of a three-day meeting that began today at the UN Economic and Social Commission for Asia and the Pacific (ESCAP) in Bangkok, Thailand.

The Third Session of the Committee on Disaster Reduction brings together policymakers and experts to discuss strategies for building resilience so that countries can better withstand, adapt to, and recover from such shocks.

In opening remarks, ESCAP Executive Secretary Noeleen Heyzer acknowledged that the Asia-Pacific experience has shown that natural disasters should be expected in greater numbers, and greater strength, in years to come.

“However, hazards become disasters in the absence of development, and without adequate investment in risk reduction,” Ms. Heyzer said. “For greater resilience to become a reality, governments need to make disaster risk reduction an integral part of longer-term development plans, across multiple sectors.”

During today’s discussions, participants also marked the transfer of ownership of the seismic station in Sittwe to the Government of Myanmar. The station was built in 2009-2010 through a project financed by the ESCAP Trust Fund for Tsunami, Disaster and Climate Preparedness and implemented by the Regional Integrated Multi-Hazard Early Warning System for Africa and Asia (RIMES). 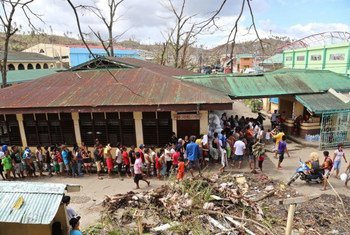 26 November 2013
The United Nations is mustering planes, ferries and trucks to boost its relief efforts in the Philippines, with food still a priority almost three weeks after Typhoon Haiyan ripped into the country, killing over 5,230 people and affecting more than 13 million others, nearly 3.5 million of them left homeless.