UN Photo/Eskinder Debebe
José Ramos-Horta, Special Representative of the Secretary-General and Head of the UN Integrated Peacebuilding Office in Guinea-Bissau.

26 November 2013
The holding of credible and peaceful elections next year is vital for the process of restoring constitutional order in Guinea-Bissau, a United Nations envoy told the Security Council today, urging continued international support to help the West African nation complete this process.

The holding of credible and peaceful elections next year is vital for the process of restoring constitutional order in Guinea-Bissau, a United Nations envoy told the Security Council today, urging continued international support to help the West African nation complete this process.

Constitutional order has still not been restored in Guinea-Bissau, which is recovering from an April 2012 coup. A transitional Government led by Transitional President Serifo Nhamadjo is in place until elections are held.

“Progress in the restoration of constitutional order in Guinea-Bissau remains frustratingly slow,” the Secretary-General’s Special Representative, José Ramos-Horta, said in his briefing to the 15-member body.

He said that lengthy consultations among national stakeholders to agree on the voter registration system and to finalize the electoral budget and timeline have significantly contributed to the delay in advancing electoral preparations, including in mobilizing the required resources to cover the elections.

Presidential and legislative elections were to have been held this month but have now been scheduled for 16 March 2014. Mr. Ramos-Horta said the holding of these polls “should remain our key priority to ensure a rapid return to constitutional order in the country.”

He commended the country’s international partners for their generous pledges of financial support to the electoral process, and urged them to disburse them rapidly.

“The onus is now on the Transitional Government to take the necessary steps towards the timely holding of the elections,” said Mr. Ramos-Horta, who is also head of the UN political mission in Guinea-Bissau (UNIOGBIS).

Delays in preparations for the elections, he noted, have had a negative impact on the implementation of the mandate of the mission, whose efforts have mainly focused on responding to the country’s immediate political, security and human rights challenges.

He reported that the human rights and security situation in Guinea-Bissau has continued to deteriorate, “with increased cases of intimidation, threats and restrictions of freedom of expression and assembly, as well as continuing interference of the military in the affairs of the State.”

In September he expressed concern to the Transitional President over continuing human rights violations and impunity in the country, and referred to the “generalized climate of fear created by the unlawful behaviour of the defence and security forces.

“That climate of fear has persisted to date and is not contributing to a conducive environment for the holding of peaceful and credible elections,” the envoy stated, adding that the transitional authorities must ensure that those responsible for unlawful acts are brought to justice.

Ambassador Antonio de Aguiar Patriota of Brazil, the Chairperson of the Guinea-Bissau Configuration of the UN Peacebuilding Commission, said that the Council’s active engagement remains critical as the country enters “what we hope are the last stages” of its transition back to constitutional order.

While preparations for the polls are under way, recent episodes of violence and intimidation are a matter of deep concern and a reminder of the fragility of the security situation and of the long road ahead towards stability, said Mr. Patriota.

“We all know that elections in themselves, while an essential pre-requisite for sustained stability, will not provide a comprehensive answer to the numerous challenges that Guinea-Bissau faces,” he stated. “Much needs to be done to secure a constructive post-electoral environment.”

Efforts towards reform and modernization of the defence, security and justice sectors – a key dimension for stability and consolidation of civilian rule – must be decisively enhanced, he said. Measures are also needed to help the country’s economy, including improvements in infrastructure and job creation.

“Despite the daunting challenges that the country is still facing, and the dire social and economic situation, aggravated by the suspension of international assistance, Guinea-Bissau has the potential to become an African success story,” said Mr. Patriota. 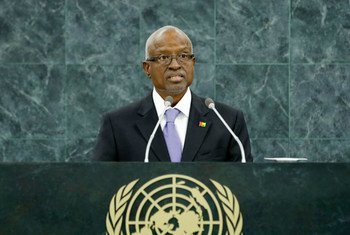 26 September 2013
Speaking at the United Nations General Assembly today, the transitional President of Guinea-Bissau, which is recovering from a 2012 coup, said that national elections have been scheduled for November 2013, but that the fight against the cycle of poverty and instability continues.