26 September 2013
Speaking at the United Nations General Assembly today, the transitional President of Guinea-Bissau, which is recovering from a 2012 coup, said that national elections have been scheduled for November 2013, but that the fight against the cycle of poverty and instability continues.

Speaking at the United Nations General Assembly today, the transitional President of Guinea-Bissau, which is recovering from a 2012 coup, said that national elections have been scheduled for November 2013, but that the fight against the cycle of poverty and instability continues.

Transitional President Manuel Serifo Nhamajo said that he has signed a decree setting 24 November as the date for legislative and presidential elections.

“What remains – which is not little – is to ensure the availability of funds to carry out an effective, transparent, and unquestionable electoral process,” he said.

Earlier this month, the UN Security Council called for presidential and legislative elections be held as soon as possible, taking into account the end of the transition period set on 31 December 2013.

Soldiers in Guinea-Bissau – which has had a history of coups, misrule and political instability since it gained independence from Portugal in 1974 – seized power in April 2012.

Constitutional order has still not been restored in the country, where Mr. Nhamajo’s transitional government has been authorized to rule until elections are held.

A UN political mission, known as UNIOGBIS, has been cooperating with Economic Community of West African States (ECOWAS) and Community of Portuguese Language Countries (CPLP) to encourage progress in the political process.

Even if the election proves successful, Mr. Nhamajo stressed, the country’s problems will not necessarily end. “In a society such as that of my country, poverty creates the propensity for political instability. In turn, political instability impacts the economic order, reduces the rate of growth and thus increases poverty rates,” he said.

“The challenge ahead of us consists precisely of escaping these two traps – the poverty trap and the political instability trap,” he added, noting he could not speak of long-term plans beyond the transitional period.

Scores of the world’s heads of State and Government and other high-level officials are expected to present their views and comment on issues of individual national and international relevance at the Assembly’s General Debate, which ends on 1 October. 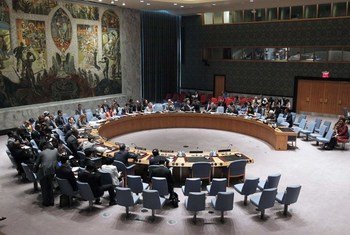 12 September 2013
The United Nations Security Council has called on Bissau Guinean authorities to resolve any outstanding issues and allow the start of the electoral process in the shortest time possible.