26 November 2013
From a “tougher than tough” life in a Gaza refugee camp to winning the title of this year’s “Arab Idol”, Mohammad Assaf told reporters at United Nations Headquarters today that he will “never forget his roots” and, as a beacon of hope for all Palestinian people, he will continue to promote peace, security and other universal values.

“I want to give hope to my people. I want them to see that nothing is impossible,” said Mr. Assaf during his first press briefing in New York since being named in June the first-ever Regional Youth Ambassador for the UN Relief and Works Agency for Palestine Refugees in the Near East. He won the 2013 Arab Idol singing contest earlier this year.

Mr. Assaf is at Headquarters participating in a host of events for the International Day of Solidarity with the Palestinian People, observed annually on 29 November. The Day marks the date in 1947 when the UN General Assembly adopted a resolution partitioning then-mandated Palestine into two States, one Jewish and one Arab. The UN Committee on the Inalienable Rights of the Palestinian People kicked off the commemoration with a special meeting yesterday attended by the young envoy and Deputy Secretary-General Jan Eliasson, among other senior UN officials.

At that meeting, Mr. Assaf described the challenging environment in which the children of Gaza grew up, saying they did not have real social or economic rights, including a decent standard of living, adequate housing, clean water, safety and dignity.

Yet, UNRWA is there every day defending Palestinians’ right to those basic human needs, which is all the more important in light of the deteriorating circumstances. He appealed to UNRWA’s supporters to ensure that the agency, which faces a funding gap of over $30 million this year, could maintain its services. “Please support UNRWA, just as it has supported me and so many other Palestine refugees by giving us the strength to work for a better future”, he said.

More than 40 per cent of the 5.3 million Palestinian refugees UNRWA aids are youths between the ages of 15 and 30, and speaking through a translator at today's press confefrence, Mr. Assaf reiterated his plea, calling on donors to scale up support because the agency’s work is a “lifeline” for the Palestinian people.

Asked about what was next for him, the 23-year-old said that while he would like to focus on his singing and “leave my mark” on the entertainment industry, he also wanted “to do something for my county and the cause of my people.”

“I want them to feel that there is hope, no matter how hard their lives are and no matter how many obstacles there are. With hope, determination and creativity one can set a goal and achieve it,” he declared.

Mr. Assaf said that creativity and talent exists in Palestine in abundance; but very few schools existed that could help that talent flourish. He again appealed to the international community to help support institutes that could instruct youth in music and arts. If their creativity is harnessed, Palestinian youth “can make a big difference,” he said. 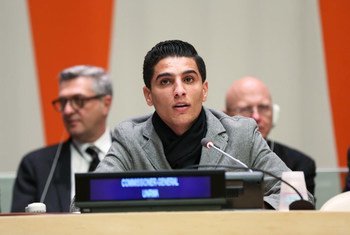 25 November 2013
United Nations officials today voiced their solidarity with the people of Palestine in their aspirations for independence and sovereignty, and stressed the importance of ongoing peace talks aimed at a two-State solution which must be given a chance to bear fruit.