26 November 2013
The United Nations human rights chief today warned that a new law restricting demonstrations in Egypt is seriously flawed and must be amended or repealed.

The law, issued on Sunday, gives local security authorities the power to ban gatherings that would, among other things, constitute a threat to “security” or “disrupt citizens' interests” without specifically detailing the conduct.

“The fact that the law criminalises acts by demonstrators which may breach 'security and public order,' without clearly defining these terms, leaves the door open to a very restrictive and repressive interpretation,” said Navi Pillay, the UN High Commissioner for Human Rights.

“Of particular concern are the provisions on the use of force by law enforcement officials and the excessive sanctions, including massive fines as well as prison sentences, that can be imposed on those found to be in breach of this law,” she stressed.

The new law prescribes a list of escalating measures that law enforcement authorities can employ, after issuing warnings, to disperse unruly demonstrators. These include tear gas, water cannon, smoke grenades, warning shots, rubber bullets, and even live ammunition which is prohibited by international standards except in unavoidable instances in order to protect lives.

“This is a country whose people have proclaimed loudly, clearly, courageously and repeatedly their desire to be able to demonstrate peacefully in accordance with their international human rights,” Ms. Pillay said. She added that Egyptian civil society organizations and human rights defenders have raised concerns about the law which have not been taken into account.

“There is a real risk that the lives of peaceful protestors will be put at risk because of the violent behaviour of a few, or because the law may too easily be interpreted by local security authorities in a way that permits them to use excessive force in inappropriate circumstances,” the High Commissioner said.

Among other concerns, she noted that under the new regulation, protest organisers in most cases are bound to give at least three days' notice to the police.

The law is also “much too wide-ranging in terms of restricting locations,” she said. It has a sweeping ban on public meetings or assembly for political purposes in and around places of worship which number in the tens of thousands in Egypt.

The country has been undergoing a democratic transition following the toppling of President Hosni Mubarak two years ago in the wake of mass protests. This past July, renewed protests, in which dozens of people were killed and wounded, led to the Egyptian military deposing President Mohamed Morsy. The Constitution was then suspended and an interim government set up. 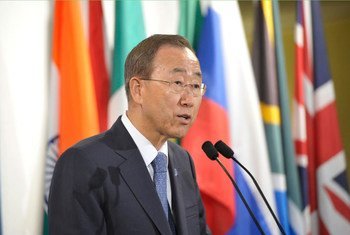 13 November 2013
Secretary-General Ban Ki-moon has stressed the importance of respecting the right to freedom of assembly as well as peaceful protest, as the state of emergency that has been in place for three months in Egypt expires.