Former child soldiers and girls used as sex slaves in the Democratic Republic of the Congo (DRC) desperately wish to be reunited with their communities – to return to school or get jobs ¬ a United Nations envoy said today, urging authorities to seize every opportunity to better protect children affected by conflict-related violence.

In her first press conference since returning from the eastern DRC, the Special Representative of the Secretary-General for Children and Armed Conflict, Leila Zerrougui told reporters in New York that there are positive signs the Congolese Government has taken steps to aid children caught up in the conflict.

“I can confirm and reconfirm that there is strong commitment to end recruitment of underage children, also of sexual violence, specifically with regard to recruitment of children,” she said, noting that children are being systematically released from the military.

Since the signature of the Action Plan, hundreds of children have been released as a result of stronger cooperation between the Government and the UN, she said.

“But we have still a lot of challenges,” Ms. Zerrougui noted. “The challenges are first of all that children that are associated with armed groups are not considered as enemies but as victims and deal with them and treat them as such.”

The Special Representative said that between 25 and 30 per cent of the soldiers who are laying down arms in the DRC are underage recruits.

Children taken from their communities are often forced to commit atrocities against their own groups in order to sever links and prevent them from returning home.

Another challenge, this one specific to girls who are abducted by soldiers, is being accepted by a community when they return with babies born in the bush.

“The UN stands ready to work with Congolese authorities to develop a national demobilization plan that will ensure adequate planning and resources for the reintegration of children,” Ms. Zerrougui said in a news release.

During the week-long visit, Ms. Zerrougui, who was accompanied by UN Children’s Fund (UNICEF) Representative Barbara Bentein, reviewed the implementation of the Action Plan signed in October 2012 by the Government of the DRC to end and prevent recruitment and use of children in the national security forces, as well as sexual violence.

Meanwhile, Secretary-General Ban Ki-moon’s Special Envoy for the Great Lakes, Mary Robinson, is in Rwanda today as part of a regional visit to help shore up support for the peace efforts.

She is focusing on the immediate priority of the so-called Kampala dialogue in the Ugandan capital, where the M23 rebel group and the DRC Government failed to reach agreement earlier this month.

The M23 – composed of soldiers who mutinied from the DRC national army in April – along with other armed groups – has clashed repeatedly with the DRC national forces. In the past year, the fighting has displaced more than 100,000 people, exacerbating an ongoing humanitarian crisis in the region which includes 2.6 million internally displaced persons and 6.4 million in need of food and emergency aid.

The Special Envoy is also seeking to foster progress in implementing the broader commitments of the 11-nation Peace, Security and Cooperation Framework for the DRC and the Region, which she has called “a framework of hope”. 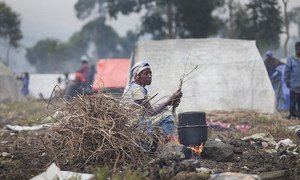 Senior United Nations officials today expressed concern about reports of dozens of children who escaped from the 23 March Movement (M23) in the Democratic Republic of the Congo being retaken by the rebel group and could face other serious security threats.