WFP
Families in the Philippines queue up to receive food rations, including WFP rice, from the Department of Social Welfare and Development.

26 November 2013
The United Nations is mustering planes, ferries and trucks to boost its relief efforts in the Philippines, with food still a priority almost three weeks after Typhoon Haiyan ripped into the country, killing over 5,230 people and affecting more than 13 million others, nearly 3.5 million of them left homeless.

“There has been significant progress in the delivery of relief items, and we continue to widen the geographic reach of the operation so that we can get to people on outlying islands,” UN World Food Programme (WFP) Country Director Praveen Agrawal said.

“As we enter the third week of this emergency response, food remains a priority need for affected communities.”

Since 13 November, WFP has dispatched more than 4,000 metric tons of rice and 127 metric tons of high energy biscuits for distribution by partners. WFP is working closely with the Government, which has distributed more than 1.3 million family food packs containing WFP rice.

Rice and High Energy Biscuits (HEBs) are being delivered by airlifts to remote island communities off the coast of Guiuan and Iloilo. Some of these hard-to-reach locations are receiving food assistance for the first time.

WFP trucks are delivering bulk rice rations to badly-affected coastal communities in East Samar and Guiuan while a WFP-chartered “roll-on roll-off” vessel with a 2,400 metric ton cargo capacity arrived in Tacloban yesterday with tents, blankets, water kits and jerry cans on behalf of the whole humanitarian community. It will continue to shuttle goods from the nearby island of Cebu to Tacloban.

More than 1,000 metric tons of relief and support supplies - tents, kits for newborn babies, hygiene kits and mobile storage units - have been flown in to the Philippines from the UN Humanitarian Response Depots managed by WFP in Dubai in the United Arab Emirates, Subang in Malaysia, and Brindisi in Italy.

The WFP-managed UN Humanitarian Air Service (UNHAS) is operating two helicopters and a nine-passenger plane out of Cebu, serving the humanitarian community. So far, UNHAS has carried 167 humanitarian passengers on 43 flights to nine locations.

Meanwhile the UN refugee agency (UNHCR) is helping the Government decongest evacuation centres. Thousands of people were evacuated to public buildings such as stadiums, schools and churches ahead of the November 8 typhoon. Many have since left, but an estimated 240,000 people still remain in some 1,100 centres in overcrowded conditions with limited water and sanitation facilities.

UNHCR has so far distributed supplies for more than 50,000 people, including tents, blankets, jerry cans and kitchen sets. 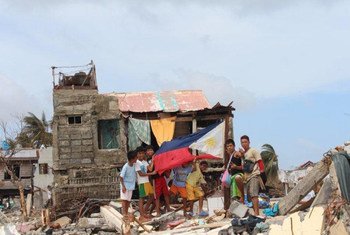 25 November 2013
As part of its relief response to the massive devastation in the Philippines from Typhoon Haiyan, the United Nations has launched a cash-for-work programme that will eventually employ 200,000 villagers over the next six months.