On the spot in Queens, New York where the United Nations General Assembly met during the late 1940s, a Mexican artist is testing his hypothesis that ordinary people, through creative approaches, can find solutions to the challnges the world body is tackling today.

On the spot in Queens, New York where the United Nations General Assembly met during the late 1940s, a Mexican artist is testing his hypothesis that ordinary people, through creative approaches, can find solutions to the challenges the world body is tackling today.

One-hundred-ninety-five New Yorkers who are immigrants from or have family connections to the 193 UN Member States and two observers - State of Palestine and the Holy See – participated this weekend in ‘The People’s United Nations p(UN)’ event at the newly reopened Queens Museum.

“This is a privilege to be asked to be a part of this bold artistic endeavor by Pedro Reyes,” said Peter Launsky-Tieffenthal, UN Under-Secretary-General for Communications and Public Information, referring to the artist who created the event and exhibition which will run through March 2014.

Opening the installation event on Saturday, Mr. Launsky-Tieffenthal paid tribute to the borough hosting the Museum, calling Queens “a microcosm of the United Nations” with residents from more than 100 different countries speaking at least 138 different languages.

“It is one of the most ethnically and culturally diverse places on the planet, a place where people from all backgrounds are able to live side by side,” said the UN’s top communications official.

In 1946, the spot from which he spoke was the meeting place of the UN General Assembly, which gathered at the then-New York City’s Pavilion, until 1950. The diplomats would move across the East River to the now iconic 39-floor UN Headquarters building in Manhattan in 1952.

“It’s a reminder that the UN is connected to its host city in so many ways, and has been for years,” Mr. Launsky-Tieffenthal said.

The Museum overlooks the Flushing Meadows-Corona Park, the site of the 1939 World’s Fair, and the steel globe Unisphere which has since become a symbol of the borough.

The artist, Mr. Reyes, is hoping to evoke the Organization’s history for the installation, which according to its Facebook, included instruction to delegates such as: ‘Imagine in a perfect world, you open the newspaper and see an ideal headline from your country. Write that headline.’

The “representatives” from Bahamas, Benin, Denmark, and Zimbabwe wrote, “Education on the Go, College on Wheels.” The team which included Azerbaijan, Montenegro, Philippines, Rwanda and Somalia chose: ‘The Philippine Government Partners with the Vatican to Open Free Abortion and Birth Control Clinics.’

“The Sun Welcomes Japanese Nuclear Reactors” and “From year 2130: Remembering Our Nation's Separation into North and South Korea and Celebrating 50 years of Unity”, were among some other answers.

Over the course of two days, the experimental group used theater games, group therapy, and techniques from social science to grapple with a set of surprising and provocative proposals as well as real-life problems, according to the Museum website.

“It is precisely the lighthearted spirit of play that allows the participants to engage in subjects whose magnitude would otherwise overwhelm us,” Mr. Reyes is quoted as saying.

Highlighting the parallel activity around him, Mr. Launsky-Tieffenthal said he hoped the world leaders took note of the willingness and eagerness with which the delegates engaged with each other “to learn, to play, to argue and to dream together as part of the People’s United Nations.”

Mr. Reyes’ exhibit also includes a series of art work on display for the next four months.

Among them the “Drone Dove”, which merges the form of an unmanned military drone and a dove of peace, as well as the “Colloquium”, a sculpture of delicately interlocking marble panels which, on close inspection, turn out to be blank cartoon speech bubbles communicating without words. 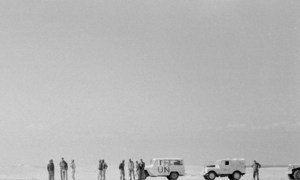