UN Photo/JG
UN Emergency Force in Egypt (UNEF) observers meet in El Ballah, Egypt, with Israeli authorities, 1957.The photo is on display at the UNEARTH exhibit in New York.
20 November 2013
Culture and Education

Unearth: to discover (something hidden, lost, or kept secret) by investigation or searching.

The United Nations is telling its own history and spotlighting major global issues through a compilation of nearly 70 years of archival history - photographs, posters, videos and recordings - with an exhibit at a former carriage house near the Organization's Headquarters in New York.

'UNEARTH,' currently on view at The Gabarron Foundation in Manhattan, is being called the UN's "most revealing and broadest exhibition ever assembled," and celebrates the world body's achievements in human rights, development, humanitarian assistance, and peace and security.

"The messages carried by the UN-produced images and sounds inform us about our own experiences in recent history," said Chaim Litewski, the main curator of the exhibit and the head of the UN Television Section. "If history is the record of the development of human society, this exhibition helps us to comprehend the extraordinary and wide encompassing role the UN has played in shaping human history in the past seven decades."

The multi-media exhibit includes 40 photographs dating from the 1950s. Mark Garten, the head of the UN Photo Unit, discusses the selection process and details some of the key images in the photo story below.

UNEARTH also includes campaign posters, and a wide range of films, videos and audio that have rarely been seen, as well as works by iconic artists including Victor Vasarely, Robert Rauschenberg, Joan Miró, Marc Chagall, and Cristobal Gabarron, whose work inspired the Foundation.

"Looking at these images, one can 'read' fairly easily the UN's position regarding controversial subjects," noted Mr. Litewski.

In addition, the exhibit includes a series of panel discussions, interactive film screenings and audio recordings.

"I always liked this one because it shows the topic of development in a very interesting way," Antonio Carlos da Silva, Chief of UN Multimedia Resources Unit, said about the 1985 documentary 'Himalayan Journey' by producer Paul Hee.

Against the backdrop of the world's highest mountains, the film portrays the flying missions of UN aircraft in Nepal which carried food, schoolbooks and other essential supplies to areas where roads were nearly non-existent.

Mr. da Silva and a group of UN curators that included Mr. Litewski selected the 32 videos on display, which are being shown in weekly screenings at The Gabarron along with classic recordings of UN Radio programmes featuring celebrities such as Audrey Hepburn, who was a UNICEF Goodwill Ambassador, and UN Messenger of Peace Michael Douglas. The recordings also include musical performances at the UN such as a set by Stevie Wonder, another Messenger of Peace.

Another of Mr. da Silva's favorites, which is also being screened today under the theme of development, is an animated short-film from 1992. Produced by Maria Consuelo T. Fabregas, the title 'Nguyamyam' is a colloquial word that means "to eat." The film is about an edible planet called Pakaskas which inhabitants eat up their precious resources.

"It is an educational video in a way that UNTV does not produce anymore. Today's production is more focused on news stories with more informational value, rather than producing educational videos, which have longer-term values," he said.

"These are the types of products that you know about the source only if you work in curating or preservation," Mr. da Silva said. "At the time, they were widely distributed, but they were left untouched over the years."

He is heading a project to digitize the UN Audiovisual Archives, which are currently being housed in a New Jersey facility as the Organization's New York complex undergoes renovations. The process is moving forward steadily but slowly due to limited funding.

"I bet if you put these on YouTube, they would be made popular today," Mr. da Silva summed. "The role of archives is to preserve the work of the UN over the years. What it was then and what it is today."

The UNEARTH exhibit's name came from this idea of digging in the archives and bringing materials back up. It was originally linked with World Day for Audiovisual Heritage marked on 27 October.

The project has since been expanded and will tour internationally, then return to New York in 2015 when the UN marks its 70th anniversary. The timing also coincides with the deadline for the eight anti-poverty targets known as the Millennium Development Goals (MDGs).

In addition to the vast UN Archives, UNEARTH is a collaboration with the Presidential Library and Museum of Franklin D. Roosevelt whose vision and support, along with that of his wife Eleanor, helped to create the UN, as evidenced by documents on display.

"We have some handwritten papers, with his note, this one was written in Tehran, at a meeting with [Winston] Churchill," Juan Gabarron, Director and CEO of the Foundation said pointing to a series of framed documents as he gave a tour of the two-story exhibition.

From the shaping of the UN in these early documents, the show is then organized to move through time according to the three pillars of the Organization &#8211 development, human rights and peace and security. "So that's the pre-UN and we did each of the pillars with ten photographers," he said waving through a large downstairs area with photographs hanging around.

"We start with New Guinea in June 1956 and it goes from there with countries and places on the theme of human right, until the ten over there where we start over with development, and the next ten are peace and security, and the last ten are the humanitarian assistance."

The second level of the building is taken up with UN art posters by different artists, including one designed by Mr. Gabarron's father for the UN Millennium Assembly and Summit featuring the recognized "UN2000" logo.

The poster is actually Cristobal Gabarron's painting, "Dawn in the New Millennium", a brightly coloured work depicting three blocks of symbolic elements representing the natural world, human civilization - with shapes suggesting books or buildings, including one similar to United Nations Headquarters - and the universe.

"It's another layer of the same values," Mr. Gabarron said about the Foundation's values of promoting understanding through culture, and the UN's parallel aims of fostering more effective international cooperation for human rights, development, peace and security.

"It's also a great way of showing people what is happening at the UN and getting them involved."

Today at The Gabarron, Olav Kjørven, Special Adviser to the UNDP Administrator on the Post-2015 Development Agenda and moderator Deborah Seward, UN Director of the Strategic Communications Division, Department of Public Information, will hold an interactive panel.

The exhibit runs through 27 December. 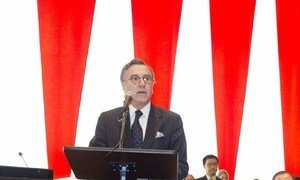 Partnerships are vital if countries want to reduce poverty and advance economic and social progress, United Nations officials stressed today, as they considered ways to address challenges and accelerate the achievement of the global anti-poverty targets known as the Millennium Development Goals (MDGs).