WFP/FITTEST
The Emergency Telecommunications Cluster (ETC), which works to provide communications services for all humanitarian workers, establishes connectivity at Tacloban town hall in the Philippines.

20 November 2013
With all manner of aid beginning to make its way to victims of Typhoon Haiyan, the United Nations telecommunications agency has today stepped in to provide equipment such as satellite phones and laptops to the World Health Organization (WHO) and Philippines Government crisis response units.

The International Telecommunication Union (ITU) announced that it will donate satellite terminals for both voice and high-speed data to WHO to support its emergency humanitarian work in the wake of the devastating storm, which, according to latest estimates, killed several thousand people and affected nearly 13 million overall, including some 4 million displaced and 2.5 million in need of food aid.

ITU has already supplied 40 Thuraya satellite phones to facilitate health relief efforts in the worst-affected parts of the country.

“At a time when the Philippines is recovering from the Haiyan crisis, relief efforts by UN humanitarian agencies are much needed to assist victims in the affected towns and villages,” ITU Secretary-General Hamadoun Touré said.

The Geneva-based agency is also deploying an additional 50 satellite phones, including 25 Iridium Sat Phones, 10 Thuraya Sat Phones and 15 Inmarsat BGAN units, and is also deploying 25 laptops to help people re-establish contact with their family members in other cities of the Philippines and abroad.

Richard Brennan, WHO Director of Emergency Risk Management and Humanitarian Response, expressed his gratitude to ITU for its rapid assistance to fill a major resource gap in the health sector’s response to the crisis.

“These satellite phones will be of tremendous benefit to our humanitarian operations in support of the Philippine Ministry of Health, as well as WHO and its partners, helping us gather and manage information for disease surveillance, early warning systems and sectoral coordination.”

“We take our humanitarian work very seriously,” said Brahima Sanou, Director of ITU’s Telecommunication Development Bureau. “In dire situations such as the one in the Philippines, ITU stands ready to support UN agencies in their humanitarian effort to assist people caught up in such disasters, especially those who have been afflicted by illness and those who have been displaced from their homes.”

Meanwhile, the UN Office for the Coordination of Humanitarian Affairs (OCHA) is reporting that access and logistics continue to improve, but there are still power outages in some areas.

The relief operation has been scaled up substantially, especially in Tacloban, the area hit the hardest by the storm. All residents now have access to clean drinking water and hygiene kits are being distributed to help prevent outbreaks of water-borne disease, OCHA said.

UN Emergency Relief Coordinator Valerie Amos, who is the head of OCHA, today visited Roxas, an area badly affected by the typhoon and severe winds, where she met with people living in evacuation centres. She said that the top priorities are helping them build adequate shelters and getting their livelihoods back up and running.

Ms. Amos also met the Governor and members of the humanitarian relief teams working in Roxas and praised the coordination among the authorities, humanitarian agencies and military units who are delivering aid. 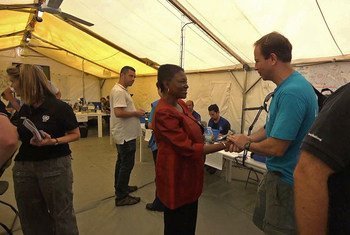 19 November 2013
The United Nations is ramping up relief operations in the Philippines as Secretary-General Ban Ki-moon warned a climate conference today that the deadly devastation wrought by Typhoon Haiyan proves that the world must act now to counter the wrath of a warming planet.