19 November 2013
The United Nations is ramping up relief operations in the Philippines as Secretary-General Ban Ki-moon warned a climate conference today that the deadly devastation wrought by Typhoon Haiyan proves that the world must act now to counter the wrath of a warming planet.

“The science is clear. Human activities are the dominant cause of climate change. We cannot blame nature,” he told the conference held under the auspices of the UN Framework Convention on Climate Change (UNFCCC) in Warsaw, Poland.

“Climate change threatens current and future generations. We need look no further than last week’s catastrophe in the Philippines,” he said of Haiyan, which according to latest estimates killed several thousand people and affected nearly 13 million overall, including over 4 million displaced and 2.5 million in need of food aid. “All around the world, people now face and fear the wrath of a warming planet.”

In a separate press encounter with Polish President Bronislaw Komorowski, Mr. Ban said the UN continues to do “everything we can” to support people in need.

Over the next six months WFP plans to provide food aid for 2.5 million people in the area hit by the typhoon, she said, adding that logistical challenges remain extremely constraining although progress has been made. But some small islands still have not been reached.

As food aid will be crucial in the upcoming weeks, “cash for work” programmes and “food for work” programmes will be implemented in areas where banks are functioning, with participants receiving cash or food in exchange for rehabilitating infrastructure and removal of debris.

UN Humanitarian Coordinator Valerie Amos, on her second visit to the Philippines in a week, noted a significant improvement in aid efforts. “Today was very different. The relief operation has been scaled up substantially,” she said of her visit to Tacloban, one the worst hit areas.

“People are making every effort to rebuild their lives and the early signs of entrepreneurialism are all there, with women cooking and selling food, others removing debris or providing other support in the community. National and local Government efforts, supported by the international community, are paying off.

“Every day aid efforts gather pace with the systems getting through to more people. Significant food and medical assistance has been provided and water services, as well as limited telecommunications services, restored.”

But Ms. Amos stressed that the needs are immense with ensuring that everyone has safe drinking water a major challenge as well as the need for emergency shelter and basic protection for women and children with over 500,000 homes completely destroyed.

UN Refugee Agency (UNHCR) spokesperson Adrian Edwards told the press in Geneva that thousands of typhoon survivors from Tacloban and other affected areas were believed to have left in search of family and aid in surrounding areas or as far away as Cebu and Manila.

Starting tomorrow, UNHCR and its partners will set up a designated area at the airport in Tacloban to collect information on these displaced people, their destinations and vulnerabilities, and try to ensure assistance on arrival and prevent trafficking incidents.

In the Ormoc area, local authorities told UNHCR that although most of the 109 affected administrative areas had received some aid, food, medicines and shelter are still urgently needed, with some places yet to receive non-food aid such as plastic sheets and blankets.

UNHCR aid continues to arrive in the country through ongoing airlifts. In total, nine flights will bring in 10,000 tents, 112,000 blankets, 66,000 plastic sheets, solar lanterns and other relief supplies for more than 100,000 people.

For its part, the UN Food and Agriculture Organisation (FAO) warned today that hundreds of thousands of farmers whose crops were destroyed by Haiyan need urgent aid to sow new seeds before the end of the current planting season.

“Initial estimates reveal that hundreds of thousands of hectares of rice and other key crops like coconut have been affected due to the typhoon,” said Dominique Burgeon, Director of FAO's Emergency and Rehabilitation Division in Rome.

“Planting of the secondary season, mostly irrigated rice, was well underway and it is expected that crops are severely compromised. If we want to avoid entire regions of the country having to rely on food aid, we need to act now to help vulnerable families to plant or replant by late December,” he said.

FAO has called for $24 million for immediate aid in fisheries and agriculture targeting 250,000 households as part of the $301 million UN-coordinated humanitarian Flash Appeal launched on 12 November.

Battle against HIV/AIDS in Asia-Pacific ‘far from over,’ UN agency warns 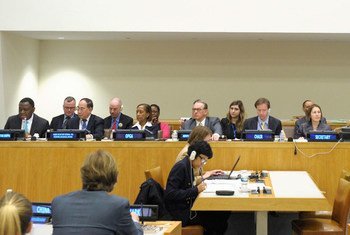 7 April 2014
Member States today kicked off a week-long assessment at United Nations Headquarters of action taken over the past 20 years to improve people’s lives and address population issues amid changes in ageing, fertility, mortality, migration and urbanization.