UNIDO, 2011
Piassa helps at her father’s workshop, in Nampula, Mozambique after receiving entrepreneurship training under the UNIDO ECP Programme.
20 November 2013

“Africa’s economic dynamism, young population and potential for innovation form the foundation for stronger and competitive industries, Mr. Ban said in his message to mark this year’s Africa Industrialization Day. Designated by the General Assembly in 1989, the Day will this year highlight the crucial role of job creation and entrepreneurship in eradicating poverty.

“Although Africa is home to some of the world’s fastest growing economies — with growth across a variety of sectors — too many people are still being left behind,” the UN chief said, stressing that the region is affected by widespread unemployment — particularly among youth. Many, especially women, are engaged in vulnerable forms of work with low and unstable pay.

“As we strive to meet the Millennium Development Goals and shape the post-2015 agenda, we must address the challenges of joblessness, youth unemployment and the shortcomings of a large informal economy.”

The Secretary-General said that focusing on job creation, entrepreneurship and the promotion of small and medium enterprises can boost inclusive and sustainable industrial development across the continent.

“As we mark this fiftieth anniversary year of the establishment of the Organization of African Unity, the United Nations renews our commitment to Africa’s development and the African Union’s efforts to achieve inclusive growth,” said Mr. Ban, urging all Member States to work together to foster job creation and entrepreneurship throughout the continent as critical ways to build a more prosperous and sustainable future for all.

While the Day is commemorated annually on 20 November, the 2013 celebration will take place on Friday, 22 November at UN Headquarters in New York. The UN specialized agency for promoting inclusive and sustainable industrial development, known as UNIDO, the lead agency on the issue of Africa’s industrialization, will jointly host an event with the Office of the Special Adviser on Africa, and the Permanent Observer of the African Union to the UN.

The event will feature an interactive panel discussion with experts from the private sector, academia and public sector, who will share their views on the issue. It will include statements from the President of the General Assembly, the UN Secretary-General, the Director General of UNIDO, the chair of the African Group and the Permanent Observer of the African Union.

Refugees from Pemba and Zanzibar islands will go back if tensions ease: UNHCR 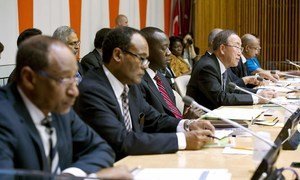 Hailing the success of the self-assessment mechanism agreed among African leaders a decade ago, Secretary-General Ban Ki-moon today said the peer review process has not only fostered more principled leadership and constructive national dialogue but has opened up more space for citizens to participate in the decisions affecting them.