UNHCR/D. Mbaiorem
The ruins of a house that was torched by LRA fighters in Nguili-Nguili village, close to Obo Town, Central African Republic.
20 November 2013

In a report presented to the Security Council today by United Nations Secretary-General Ban Ki-moon’s envoy to Central Africa, the UN chief called on the international community to provide the resources needed to combat the Lord's Resistance Army (LRA), a violent armed group undermining stability in the region.

“I regret that very little donor assistance has been provided in this regard,” he told the Security Council in a report presented by his Special Representative for the region, noting that it has been a year since he first called for international support for a five-point strategy aimed at eliminating the threat posed by the LRA in several African countries.

“I reiterate my call on the international community to support ongoing efforts to address the threat posed by the Lord’s Resistance Army in order to ensure that the progress achieved over the past several years is sustained.”

In presenting the report, the Special Representative and head of the UN Regional Office for Central Africa (UNOCA), Abou Moussa, pointed to a host of issues undermining stability in the region, including conflict in the Central African Republic (CAR) with its flow of refugees straining the capacity of neighbouring countries.

“The potential for the crisis in the Central African Republic to spill over into the wider sub-region is real,” he stressed, also highlighting threats posed by terrorism and extremism from countries outside the immediate sub-region such as Mali and Nigeria, the role of transnational crime, including piracy in the Gulf of Guinea, and illicit trade in remote border regions of CAR and the Democratic Republic of Congo (DRC).

The LRA, notorious for carrying out massacres in villages, mutilating its victims and abducting boys for use as child soldiers and forcing girls into sexual slavery, was formed in the 1980s in Uganda and for over 15 years its attacks were mainly directed against Ugandan civilians and security forces, which in 2002 dislodged it. It then exported its activities to Uganda’s neighbours, such as the DRC, CAR and South Sudan.

Although estimates suggest the LRA comprises only a few hundred combatants operating under the leadership of Joseph Kony, its capacity to attack, terrorize and harm local communities remains.

On the LRA, Mr. Moussa, who was joined by the African Union Special Envoy for LRA Issues, Ambassador Francisco Madeira, reported that their joint diplomatic efforts have ensured continuing regional cooperation among the Governments of LRA-affected countries. In particular, African Union Regional Task Force operations resumed in August in the CAR, while the Democratic Republic of Congo lifted border restrictions for Regional Task Force operations conducted by foreign contingents.

With critical support from US military advisers, he said Regional Task Force contingents are now fully operational. Military operations have degraded the LRA and limited it to pursuing survival tactics. However, recent attacks in South Sudan attributed to the LRA are a reminder that the group remains a serious and unpredictable threat to communities throughout the sub-region.

“We must therefore remain vigilant and continue malting progress on the implementation plan for the UN regional strategy to address the threat and impact of the LRA, which remains the guiding framework for our collective efforts,” Mr. Moussa said.

“Despite the decrease in Lord’s Resistance Army-related incidents and a reduction in the number of displaced people in the affected areas, the force remains a serious threat, with its senior leadership intact and with an enormous capacity for brutality,” Mr. Ban said in his report.

Mr. Moussa stressed UNOCA’s determination to strengthen its cooperation with regional organisations such as the Economic Community of Central African States (ECCAS) on all threats to regional stability. 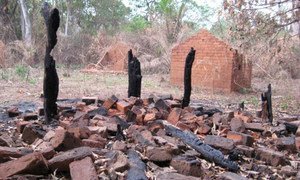 Concerned that lingering instability in the Central Africa Republic (CAR) following a power grab by rebels has stalled operations to neutralize the Lord’s Resistance Army (LRA), the Security Council today urged regional actors to cooperate on all fronts to tackle the dual crises.