UNHCR/M. Hofer
Syrian refugees queue to be registered on the outskirts of the Lebanese town of Arsal.
19 November 2013

The United Nations refugee agency and other humanitarian partners have been working with Lebanese authorities to cope with the influx of an estimated 6,000 people who have arrived from Syria in recent days.

The spark for the displacement is the reported escalation in violence in the Syrian town of Qarah and surrounding villages, Adrian Edwards, spokesperson for the UN High Commissioner for Refugees (UNHCR), said at a news conference in Geneva.

Refugees told the agency that they spent days living in underground shelters before deciding to flee. “A family of ten told us they had crammed into a single car on Saturday evening to flee as the situation had become ‘unbearable,’” said Mr. Edwards.

Most of the newly arrived refugees are now in the north-eastern Lebanese town of Arsal, which is home to a population of some 60,000 people, including – already prior to the latest influx – 20,000 registered refugees.

“UNHCR and its partners have contingency plans in place for these sudden movements – and indeed for larger numbers should more cross,” Mr. Edwards said. “There are concerns that ongoing violence in the vicinity of Qarah and central Qalamoun towns could force more to flee Syria into the already stretched east-Bekaa area.”

Over 1,000 of the newly arrived Syrian families in Arsal have registered with the local municipality in the past three days and been provided with emergency assistance, including food parcels, blankets, mattresses, kitchen sets and hygiene kits.

The UN World Food Programme (WFP) has so far assisted around 3,555 people with food parcels for one month, spokesperson Elisabeth Byrs told reporters in Geneva, adding that distribution will continue today.

She said that once the new arrivals are registered, they would receive WFP e-cards for the next month. WFP is also monitoring the food security situation in Arsal and the ability of the shops to respond to the needs of the new influx.

Meanwhile, sheltering the large numbers of new arrivals remains a challenge, according to UNHCR. Newly arrived refugees have been directed to four temporary collective shelters in public halls and mosques.

Up to 80 families have found shelter in informal settlements while others have set up makeshift dwellings in unfinished buildings or are staying with local families. “None of these provide a long-term option,” noted Mr. Edwards.

“UNHCR with its partners is ready to provide further shelter options if the Government approves land for use. In the meantime, all is being done to ensure that the temporary locations are protected against the elements and provide some warmth to the refugees.”

The number of people fleeing their homes is growing as the conflict in Syria continues unabated. An estimated 4.25 million Syrians are now displaced within their own country, while a further 2 million have sought refuge in neighbouring countries since fighting began in March 2011.

♦ Receive daily updates directly in your inbox - Subscribe here to a topic.
♦ Download the UN News app for your iOS or Android devices.
syria|refugee 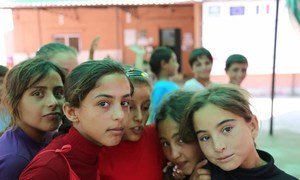 The international community should match Lebanon’s generosity in supporting more than 400,000 refugee children from Syria by further investing in the country’s public services, the head of the United Nations Children’s Fund (UNICEF) said today.