OCHA/D. Palanivelu
Over half of Syrian refugees in Lebanon are children.

1 November 2013
The international community should match Lebanon’s generosity in supporting more than 400,000 refugee children from Syria by further investing in the country’s public services, the head of the United Nations Children’s Fund (UNICEF) said today.

“Lebanon has made a tremendous commitment to caring for children fleeing Syria, despite the increased pressure on public services such as health and education,” Executive Director Anthony Lake stated as he concluded his visit to the country.

“The international community has not only a humanitarian obligation to the children but a responsibility to match Lebanon’s commitment, by investing more in services that benefit every child in this country – both refugees and those in the host communities.”

Lebanon is one of several countries that have accepted people fleeing the ongoing conflict in neighbouring Syria. The fighting between the Syrian Government and opposition groups seeking to oust President Bashar Al-Assad, which began in March 2011, has displaced over 4 million people inside the country and sent 2 million seeking safety outside its borders.

The UN estimates there are nearly 800,000 refugees from Syria in Lebanon – constituting one-fourth of the country’s population and stretching its resources to capacity.

In meetings with Lebanese President Michel Sleiman and Prime Minister Najib Mikati, Mr. Lake reaffirmed UNICEF’s continued collaboration in the areas of health, nutrition, education, water, sanitation, hygiene and protection through programmes targeted at the most vulnerable children in some of the poorest communities in Lebanon.

Particular concerns were shared about the impact of the approaching winter months, and the need for urgent action to prepare for this especially challenging period.

“I have met Lebanese teachers working tirelessly to deliver a quality education to many more children than they ever imagined in their classrooms,” said Mr. Lake. “And I have met Syrian children living in tented settlements who still dream of seeing their homes and their toys again.”

UNICEF and other agencies working with children affected by the conflict in Syria have warned of the long-term impact of the trauma experienced by many children, urging more attention be paid to education and psychological programmes alongside life-saving services.

“We must all do more to support a generation of children who will build the future of this region,” said Mr. Lake, who arrived in Lebanon following a two-day visit to Syria.

In September, Secretary-General Ban Ki-moon inaugurated the International Support Group for Lebanon which is aimed at helping the country address the multiple challenges it faces, including hosting hundreds of thousands of Syrian refugees. 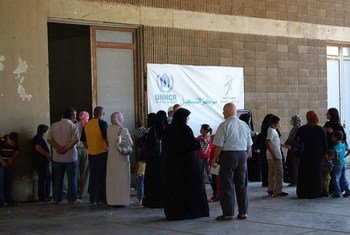 25 September 2013
Secretary-General Ban Ki-moon today convened the inaugural meeting of the International Support Group for Lebanon which is aimed at helping the country address the multiple challenges it faces, including hosting nearly 800,000 refugees who have fled the conflict in Syria.