Schools in and around Timbuktu and other parts of northern Mali are barely functioning following the occupation of the region earlier this year by armed groups, a joint assessment by the United Nations and the Government has found.

During the occupation, many schools in the northern cities of Timbuktu, Gao and Kidal were destroyed, the UN Educational, Scientific and Cultural Organization (UNESCO) said in a news release issued today.

The mission – from 18 to 23 October – observed that much of the educational infrastructure was vandalized or pillaged. School furniture was destroyed and used as fuel, while electric and digital equipment such as generators, cables, servers, computers, and printers, as well as books and laboratory material were damaged or burned.

“The state of education in northern Mali is a source of grave concern,” said UNESCO Director-General Irina Bokova. “By attacking schools, extremists tried to undermine the foundations of society, as I was able to observe when I visited the country in February.

“Everything possible must now be done to get children back into their classrooms. The future of the entire region hinges on this,” she said.

UNESCO noted that many teachers, as well as primary and secondary school students, were displaced as a result of the occupation. Some moved further inland while others left for neighbouring countries such as Niger, Mauritania, Burkina Faso and Algeria. In Timbuktu, the mission noted that most teachers were still away.

In the areas administered by Gao and Kidal, schools have not been able to reopen due to the non-payment of teachers’ travel and housing allowances.

Given this “alarming” situation, UNESCO and Mali are launching an appeal to raise funds for a public awareness campaign and bonuses to help teachers return to their posts in the north.

An inventory of damage to education facilities will also be undertaken, the agency said. The mission recommended the establishment of social and psychological support services for teachers, parents and students who have suffered trauma because of the crisis.

It is also recommending the launch of a national literacy campaign, with a specific focus on women, to help them understand the importance of sending their children, notably girls, to school. 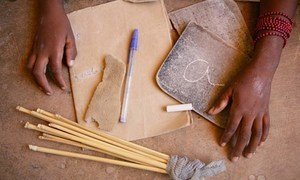 The United Nations Children’s Fund (UNICEF) today announced it will scale up efforts to help half a million children in Mali restart their education, which was disrupted by the conflict and nutrition crisis in the northern part of the country.