The Prosecutor of the International Criminal Court (ICC) today cited the need for Libya to devise a comprehensive strategy to address serious crimes committed in the country and for the international community to help close the impunity gap in the North African nation.

Fatou Bensouda told the Security Council that the “new Libya” desires to become a stable, democratic society that fully observes the rule of law and punishes perpetrators of crimes that shock the conscience of humanity.

“These aspirations, while genuine and praiseworthy, are yet to be fully realized,” she said in her briefing on the situation in Libya, which the 15-member Council referred to the ICC in 2011 – the year that the country embarked on a democratic transition following the ouster of Muammar al-Qadhafi.

Ms. Bensouda welcomed gains such as the draft law that would make rape during armed conflict a war crime in Libya, while voicing great concern that thousands of detainees remain in uncertain conditions in the country, with multiple and apparently well-founded allegations of torture and even killings in detention having been reported.

“It is incumbent upon the Ministers of Justice, Interior and Defence of the State of Libya to speedily ensure that detainees are transferred to proper government-controlled detention facilities where they can be either charged with their due process rights fully respected, or released where appropriate,” she stated. “Torture and inhuman treatment of prisoners should have no place in the new Libya.”

The Prosecutor also strongly urged the Government to surrender Saif Al-Islam Qadhafi – the former leader’s son, who has been indicted by the ICC in relation to attacks against protesters and rebels during the 2011 uprising – to the Court without further delay.

“I stress the critical importance for all States to respect and implement the decisions of the Court’s judges. The obligation to surrender to the Court persons against whom arrest warrants have been issued must be respected,” she stated.

In the case of former senior intelligence official Abdullah Al-Senussi, who is was also indicted for alleged crimes against humanity, the ICC had decided last month that he could be tried in Libya by the national authorities.

“The challenge is now for Libya to demonstrate to the world that Al-Senussi will receive a genuinely fair, impartial and speedy trial that respects all his rights and fundamental guarantees, including the right to counsel of his choice,” said Ms. Bensouda.

“It also falls upon this Council and the international community to assist Libya in this process and to ensure that justice is not only done, but is seen to be effectively done.”

She pointed out that here are many others who are alleged to have committed crimes and/or who continue to commit crimes in Libya since February 2011. “Some are still inside in the country while others are abroad where they continue to use their influence to destabilise the country and pose a security threat to civilians,” she said.

“It is impossible for the ICC alone to investigate and prosecute all perpetrators. Neither can Libya undertake this demanding task alone. Investigation and prosecution of the few by both ICC and the Government of Libya respectively should not result in impunity for the many.”

She stressed that joint complementary efforts of both the Government and the ICC, strongly and actively supported by the international community, are therefore crucial for ending impunity in the country.

“We call upon all States to assist Libya in its efforts to become a fully-fledged, secure, democratic society that adheres to the highest standards of justice,” said Ms. Bensouda. “The Libyan people deserve no less.” 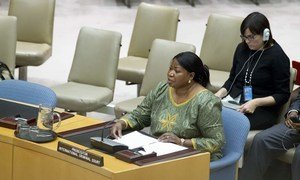 The prosecutor of the International Criminal Court (ICC) today said that if Libya can conduct fair trials of alleged perpetrators during the pro-democracy uprising in 2011, the proceedings could equal the lasting impact of the Nuremberg trials.