6 November 2013
The United Nations human rights chief today expressed alarm at the death sentences handed out in Bangladesh to 152 paramilitary soldiers for their role in a 2009 mutiny, following reports that they were tortured and their mass trials fell short of human rights standards.

“The crimes committed during the mutiny were utterly reprehensible and heinous, and my sympathies are with the grieving families, but justice will not be achieved by conducting mass trials of hundreds of individuals, torturing suspects in custody and sentencing them to death after trials that failed to meet the most fundamental standards of due process,” said High Commissioner for Human Rights Navi Pillay.

Ms. Pillay urged the Government not to proceed with the death penalty, particularly given concerns about the fairness of the trials.

“The perpetrators of the crimes must be held accountable in compliance with the laws of Bangladesh and the country’s international obligations, including those pertaining to fair trial standards, as laid down in the International Covenant on Civil and Political Rights, which Bangladesh ratified in 2000,” she said. “The trial of these 847 suspects has been rife with procedural irregularities, including the lack of adequate and timely access to lawyers.”

The officers of the Bangladesh Border Guards were convicted of crimes such as murder and sexual assault during a February 2009 mutiny in Dhaka, when 74 people, including army officers, were brutally killed. Bodies were dumped in ditches and some wives of army officers were sexually assaulted.

Yesterday, a special court in Bangladesh set up to prosecute the crimes sentenced 152 people to death and 161 people to life imprisonment. However, reports indicate that a number of suspects detained for their alleged role in the mutiny died in custody. In addition, there are allegations of widespread abuse and torture of the detainees and evidence obtained under torture was reportedly admitted in court during group trials of hundreds of defendants.

Ms. Pillay called for an independent and thorough investigation into the allegations of human rights abuses, particularly custodial torture and deaths that took place after the mutiny.

“The results of the investigation should be made public and those responsible must be held accountable,” she said, noting that, having ratified the UN Convention against Torture, Bangladesh is obliged to take effective legislative, administrative, judicial or other measures to prevent acts of torture in any territory under its jurisdiction.

“The conviction and sentencing of each of the suspects must be reviewed individually, and any evidence obtained under torture must not be admitted in court.”

Ms. Pillay also expressed concern about the conduct of the International Crimes Tribunal (ICT) established in 2010 by the Bangladeshi Government to try citizens accused of committing atrocities during the country’s 1971 independence war.

“The ICT should be a very important means to tackle impunity for the mass atrocities committed in 1971, and to provide redress to the victims who have had a long and difficult road to justice,” she said. “But it is important that the proceedings meet the highest standards if they are to reinforce the rule of law in Bangladesh and the fight against impunity in the broader region.”

The Tribunal has so far sentenced 10 individuals, seven of whom have received death sentences. 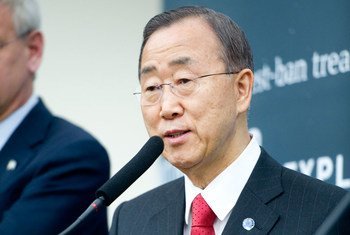 31 October 2013
Secretary-General Ban Ki-moon is concerned about the latest wave of deadly violence in Bangladesh ahead of parliamentary elections due by January.