1 November 2013
The United Nations World Food Programme (WFP) said that it is reaching close to 3.3 million people in Syria – a record for its operations – but many are still without food in areas cut off by fighting, particularly in Damascus and the capital’s besieged suburbs.

“WFP is concerned about the fate of many Syrians trapped in conflict areas and still in need of urgent food assistance,” spokesperson Elisabeth Byrs told journalists in Geneva.

“Some 3.3 million has reached in October, but the overall target for WFP for the entire Syria was to reach four million people by the end of December 2013,” the spokesperson added.

Damascus and Rural Damascus remain one of WFP’s biggest challenges due to insecurity and the siege in many conflict areas, said Mr. Byrnes.

People are still trapped in Moadamiyeh, she noted, but the UN agency has not been able to enter the area.

“WFP and UN partners had made nine unsuccessful attempts to reach Moadamiyeh and could not confirm what exactly was happening in that area,” the spokesperson said.

Since mid-2012, WFP had been unable to access 37 other locations, such as Daraya, Yarmouk, Hajar Aswad, Yalda, Babila, Sbineh, Douma, Jobar, Qaboon, Zamalka and Erbeen.

These are some of the most deprived areas where “even the most basic items were in scarce supply”, the spokesperson noted.

More than a dozen trucks with supplies are en route to the capital Aleppo, carrying enough food for 75,000 people as part of the Governorate’s October allocation.

Despite the allocations, the city is one of the Governorates where food distribution has become difficult in recent months.

More children are being admitted to hospitals with acute and moderate malnutrition, the UN Children’s Fund said, also addressing the press.

“The most difficult challenge in helping those children was access,” said UNICEF spokeswoman Marixie Mercado.

The community is also grabbling with a lack of skilled professionals to deal with malnutrition. 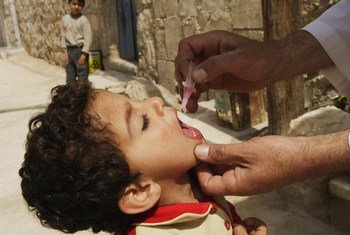 29 October 2013
The United Nations World Health Organization (WHO) today confirmed 10 cases of polio in conflict-stricken Syria, adding that health authorities in the country and neighbouring nations have already begun a comprehensive response to the outbreak.