The United Nations Economic and Social Council has embarked on a timely slate of far-reaching reforms that will make it a stronger, more issues-oriented body, as Secretary-General Ban Ki-moon notes that mounting global economic, social and environmental pressures “suggest that the world will see continued turbulence in the coming years.”

“The Economic and Social Council can be a bystander or an active intergovernmental body that engages Member States and other stakeholders to deliberate and contribute to an effective and timely multilateral response addressing immediate demands and longer-term development needs,” says the UN chief in his latest report on strengthening the Council (ECOSOC).

Mr. Ban says that the quality of life of a growing population in a sustainable manner remains the most urgent development priority for the international community. As such: “The Council has a potentially pivotal role to play in the United Nations”.

In line with the recommendations in the report, the General Assembly adopted on 20 September, a resolution containing the most far-reaching reforms of ECOSOC since 1991.

The United Nations Department of Economic and Social Affairs (DESA) is poised to play a key role in implementing these reforms. The Secretary-General has also been asked to make proposals to promote collaboration across the UN system, taking account of the functions of a strengthened ECOSOC, with DESA of the Secretariat serving as a central hub of support for the Council, in order to better utilize the Organization's existing resources to broaden support to the Council and its Bureau.

The proposals would include measures to enable the Secretariat to better support the implementation of a unified development agenda.

The new elements of the reform package adopted by the Assembly mandate the Council to provide substantive leadership to the ECOSOC system through: adopting an annual theme; convening an integration segment to promote and monitor the balanced integration of the three dimensions of sustainable development throughout the work of the ECOSOC system conveying the High-level Political Forum as part of its High-level Segment; and immediately staggering the segments of the Council throughout the year, with a work programme cycle beginning in July.

The Council's meetings will be convened in New York except the humanitarian Segment, which will alternate between Geneva and New York. Such a big shift in the methods of work of the Council is expected to lead to significant savings for the UN and Governments. 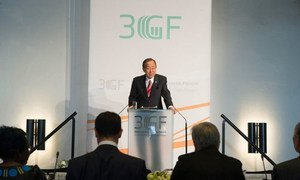 United Nations Secretary-General Ban Ki-moon today called for a clean energy transformation to help put the world on a more sustainable path, stressing that this will require innovation, investment and collaboration by all partners.