Strongly condemning the “unimaginable atrocities” committed by the Mayi-Mayi Cheka armed group during a spate of recent attacks in which some 34 civilian were brutally killed in eastern Democratic Republic of the Congo (DRC), the top United Nations official in the country today warned against impunity for such acts and urged the group to immediately lay down its weapons.

"These atrocities are unimaginable and are contradicting the values of humanity. This must have consequences. There cannot be impunity for such atrocious acts,” declared Martin Kobler, head of the UN Organization Stabilization Mission in the DRC, known as MONUSCO.

In a press release issued this morning, the Mission and its chief strongly condemned multiple attacks over the past few weeks perpetrated by elements of the Mayi-Mayi Cheka armed group, in some instances jointly with Raïa Mutomboki combatants, in several villages of the territory of Masisi in the restive eastern Congolese province of North-Kivu.

According to MONUSCO, at least 34 civilians, including 20 children, were brutally killed by the Mayi-Mayi Cheka elements in the different attacks in the eastern region.

The Mission says that its investigations have helped to confirm extra-judicial mass executions of civilians, particularly children aged between 6 months and 17 years, “as well as other gross human rights violations which may constitute crimes under international law, including crimes against humanity, committed during these different attacks.”

In one example, MONUSCO notes that on 27 September, Mayi-Mayi Cheka elements, in collaboration with Raïa Mutomboki combatants, attacked Lwibo village, killing at least 16 people, including 14 children, and burning and destroying 185 houses.

Security Council mission to travel to DR of Congo, region, in late April 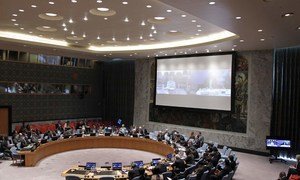 Back from a visit to Africa’s Great Lakes region, members of the United Nations Security Council heard today from UN envoys who urged progress in regional peace efforts in the wake of an apparent stall in the so-called Kampala talks between the Government of the Democratic Republic of Congo (DRC) and the M23 rebel group.