While there have been encouraging responses to human rights concerns of indigenous peoples and to helping States and other stakeholders address them, the realities for indigenous groups remain a concern, a United Nations expert has noted.

“Although I’m encouraged by positive developments in many places…I remain concerned about the reality of ongoing struggles of violations,” James Anaya, Special Rapporteur on indigenous rights, told journalists in New York yesterday after presenting his annual report to the UN General Assembly’s main social, humanitarian and cultural body (Third Committee).

Briefing the Committee, Mr. Anaya said that advocacy to advance commitment to the UN Declaration on the Rights of Indigenous Peoples, adopted by the General Assembly in 2007, was central to his work.

The Declaration’s adoption had marked a “historic moment of recognition of the existence of indigenous peoples” but its validity is debilitated by repeated assertions that it was not legally binding.

“Without broad understanding about the reasons for the Declaration and the path forward that it marks, that path will be difficult, if not impossible to implement,” he said.

Among issues he focused on during his briefing, Mr. Anaya urged greater understanding of the rights of indigenous peoples to land and resources, particularly in the context of extractive industries operating within or near indigenous territories.

The Special Rapporteur said he is in talks with the Government of Nicaragua to visit the country within the next few months, among his last official visits before his term expires next year.

Asked to extrapolate about his latest visit – an eight-day tour of Canada last week – Mr. Anaya said that notwithstanding some important positive developments that have occurred to indigenous peoples rights over the last several decades, including constitutional recognition of aborigines rights, “there is a crisis in Canada when it comes to indigenous issues.”

He noted “very many daunting challenges ahead” and urged stronger dialogue between the Government and indigenous groups to overcome a lack of confidence towards governmental programmes which are being manifested by a “sense that things aren’t moving in the right direction.”

Independent experts or special rapporteurs are appointed by the Geneva-based UN Human Rights Council to examine and report back, in an unpaid capacity, on specific human rights themes. Many of these independent experts are in New York this month to brief the General Assembly’s Third Committee on their work.

The Special Rapporteur, along with key members of the UN Permanent Forum on Indigenous Issues, are also at UN Headquarters to prepare for next year’s High-level Plenary Meeting of the General Assembly, to be known as the World Conference on Indigenous Peoples.

The World Conference will address themes such as self determination, indigenous peoples’ own visions for development and the post-2015 development agenda. It will also be an opportunity to reaffirm the importance of a full and effective implementation of the United Nations Declaration on the Rights of Indigenous Peoples.

Paul Kanyinke Sena, Chairperson of the UN Permanent Forum on Indigenous Issues, noted that the work of the UN is particularly important now as preparations for the World Conference already underway.

“If the world conference is to live up to this potential, then it is essential that the UN and Governments show the necessary political will,” Mr. Sena said.

He highlighted the importance of indigenous territories and natural resources in the 2014 conference, “We need to look at new business models for resource extractions.”

Also addressing journalists, Myrna Cunningham, a member of the Permanent Forum, who stressed the need to address issues specific to indigenous women, such as sexual and reproductive health.

Some 200 indigenous women from seven regions are due to meet next week in Lima, Peru, ahead of a January 2013 international conference at the UN Headquarters in New York to look at how indigenous women can play a greater role in the challenges of the post-2015 development agenda. 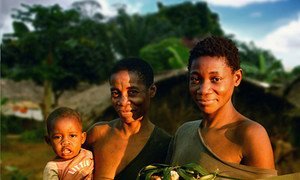 Marking the International Day of the World’s Indigenous Peoples, United Nations officials today urged governments to honour the treaties and agreements established with their indigenous groups, stressing that respecting official policies is the only way to maintain peace and advance development.