22 October 2013
Pregnant mothers and young children in the developing world are exposed to high levels of lead through unsafe paints, particularly in colours yellow and red where lead is added as a pigment, United Nations environment agency today reported amid International Lead Poisoning Prevention Week of Action.

Pregnant mothers and young children in the developing world are exposed to high levels of lead through unsafe paints, particularly in colours yellow and red where lead is added as a pigment, United Nations environment agency today reported amid International Lead Poisoning Prevention Week of Action.

“In this day and age, it is quite frankly breathtaking that parents painting their child’s nursery a cheerful red, or handing their child a colourful toy may, through no fault of their own, be exposing that child to a pernicious and damaging toxin: lead,” said Nick Nuttall, Spokesperson and Director of Communications at the UN Environment Programme (UNEP).

The study finds that the majority of the paints tested would not meet regulatory standards established in most highly industrialized countries - for example, 90 parts per million (ppm) in the United States and Canada - and that some contain astonishingly high and dangerous levels of lead.

“This report seeks to catalyze action by raising awareness among Governments, manufacturers and consumers not just that the problem exists, but that there are cheap and safe alternatives to lead already in use that can lift this health burden in a very short time,” Mr. Nuttall said.

The report also found that few countries have established regulatory frameworks for lead paint, but those that do, generally exhibit lower lead paint levels.

Worldwide, 30 countries have already phased out the use of lead paint. The Global Alliance to Eliminate Lead Paint, co-led by the UN World Health Organization (WHO) and UNEP, has set a target of 70 countries by 2015.

International Lead Poisoning Prevention Week of Action, which the Global Alliance is running through 26 October, focuses this year on the important of avoiding lead paint and using safe alternatives in order to prevent children from being harmed by lead poisoning.

Exposure to lead paint can be particularly grave among children, especially those living in low and middle-income countries which account for 99 per cent of children affected by high exposure to lead, WHO reported.

An estimated 143,000 deaths per year result from lead poisoning, often linked to lead paint, while some 600,000 new cases of intellectual disabilities are linked to childhood lead exposure.

Meanwhile, UN chemical experts have recommended the phase out of two industrial chemicals, with uses ranging from wood preservation to pest control, due to human health risks.

Every human in the world carries in his or her body traces of POPs, which circulate globally through a process known as the “grasshopper effect” and include chemicals which are agents that that can kill people, damage the nervous and immune systems, cause cancer and reproductive disorders and interfere with normal infant and child development.

POPs released in one part of the world can, through a repeated process of evaporation and deposit, be transported through the atmosphere to regions far away from the original source. They are readily absorbed in fatty tissue of fish, predatory birds and mammals through the food chains.

Both chemicals have been recommended for listing in Annexes A and C to the Convention, thus targeting their intentional production, as well as unintentional releases of the chemicals.

The recommendations will be sent to the Parties to the Stockholm Convention for consideration at the seventh meeting of the Conference of the Parties, scheduled to be held from 4 to 15 May 2015 in Geneva. 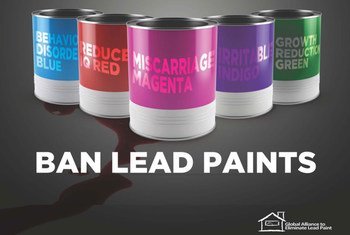 18 October 2013
Countries should strengthen national actions to eliminate lead paint, a major source of potential poisoning for young children which causes some 600,000 new cases of intellectual disabilities each year, the United Nations health agency said today ahead of a week of activities aimed at raising awareness about this key health concern.