Countries must adopt new economic policies to adjust to structural changes in the world economy sparked by the onset of the global financial crisis five years ago, according to a new United Nations report.

The Trade and Development Report 2013 notes that developed countries have so far addressed the crisis by implementing stimulus measures that rely on expansionary monetary policies, but these have been unsuccessful in fostering growth, as they have been combined with fiscal austerity and subdued private demands.

Instead, the report, which was produced by the UN Conference on Trade and Development (UNCTAD), argues that Governments must addressthe fundamental causes of the crisis, in particular rising income inequality, the diminishing role of the States, and the predominant role of the poorly regulated financial sector.

In contrast, developing countries have been able to mitigate the adverse impact of the crisis in the developed world by implementing countercyclical policies, which stimulate the economy when it is facing a downturn. However, the effects of these policies are fading away and the economic environment shows few signs of improving, making it increasingly difficult to avoid slowdowns.

The report contends that developing and transition economies that heavily depend on exports must reconsider their development strategies and rely more on domestic and regional demand.

“We are trying to understand this crisis in the long-run, and if it is a structural crisis, as we have seen, then this would mean a lot in terms of shifting economic policies,” said Alfredo Calcagno, Head, Macroeconomic and Development Branch, Division on Globalization and Development Strategies, UNCTAD, today in a briefing on the report at UN headquarters.

“One of the main changes in our view is that developing countries must concentrate on fostering their domestic trade in order to continue to grow. This does not mean that exports are no longer important, but they need to strengthen their domestic markets to adapt to new demand conditions.”

Mr. Calcagno noted that developed countries are not addressing the root causes of the financial crises, and this, compounded with mishandling the crisis itself, has contributed to the current disarray of the global economy.

Developed countries will continue to lag behind the world average, with only a 1 per cent increase in gross domestic product (GDP), reflecting the mix of a stable growth rate in Japan, a moderate deceleration in the United States, and a further contraction in the European Union (EU) area.

The increased tendency towards fiscal austerity in the EU makes it highly unlikely to return to a higher growth trajectory. In the US, private domestic demand has begun to recover but cuts in public spending are having a “contractionary” effect. In contrast, the Japanese Government is providing both strong fiscal stimulus and monetary expansion aimed at reviving economic growth and curbing deflationary trends.

The report also warns that the financial crisis has virtually stopped global trade expansion, with its volume increasing less than 2 per cent in 2012 and the first months of 2013.

“This general downward trend in international trade highlights the vulnerabilities developing countries continue to face at a time of lacklustre growth in developed countries,” the report says, and advocates for increased South-South trade and cooperation, which at the moment is concentrated mainly in Asia.

For the world economy as a whole, the report underlines that coordinated, demand-driven policies, with no country adopting austerity policies, would deliver better results in terms of growth, income distribution, employment, and global re-balancing than current policies that place the entire burden of adjustment on deficit countries. 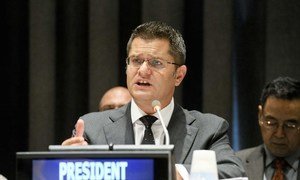 The steps needed to redress failures that led to the world economic crisis will require courage to conceive meaningful reform to the system of global economic governance, the president of the General Assembly President said today during the world body’s first-ever meeting on the global credit rating system.