10 September 2013
The steps needed to redress failures that led to the world economic crisis will require courage to conceive meaningful reform to the system of global economic governance, the president of the General Assembly President said today during the world body’s first-ever meeting on the global credit rating system.

“I believe the United Nations could play a role in helping to establish the basis for an objective and reliable international rating system,” Vuk Jeremic told the Assembly’s thematic debate on the role of credit rating agencies (CRAs) in the international financial system.

He said that in a recent report to the Assembly, Secretary-General Ban Ki-moon had proposed the “creation of a United Nations observatory of credit rating service providers,” which would, among others, “certify credit rating products and build consensus on [common] standards for rating methodologies.”

“I sincerely hope Member States will seriously consider this proposal, and that today’s participants will examine its merits in the time to come,” Mr. Jeremic said, adding that such an initiative could foster a more coherent global response to the problems associated with international financial intermediation, while ensuring that adequate investment can reach worthwhile, creditworthy development projects throughout the world.

He said that the main objective of credit rating agencies is to “reduce informational asymmetries between lenders and borrowers, by determining the ability and willingness of potential borrowers to meet their debt servicing obligations.” In making such assessments, those agencies lower the cost of intermediation, thus supporting economic and development activities.

Yet, as the role of CRAs has expanded, the scope of the criticism of the industry has followed suit. A number of concerns have been voiced as to the extent to which they can have a serious impact on financial stability.

“For example, some say that they didn’t exactly foresee Mexico’s 1994 devaluation, which had profound consequences throughout Latin America, nor did they adequately assess the financial conditions that led to the Asian tumults of the late-1990s, Mr. Jeremic said, adding that in the latter case, some have argued that the CRAs subsequent over-reaction—its steep downgrading of the sovereign debt of Asian countries most affected by the crisis—only made matters worse. Similar critiques were levelled during the recent Eurozone crisis.

Governance issues have also been raised, with certain commentators making the point that lending and borrowing incentives were distorted by the CRAs, such as the “issuer-pays” model of remuneration, leading to the creation of too much cheaply-available credit prior to the 2008 global economic crisis.

“Such differing points of view underscore the need for an objective review of the future role of the CRAs in the global financial system,” the Assembly President said. Each economic cycle is unique; and each downturn produces new surprises—two important reasons why CRAs may remain as vulnerable to making mistakes as the rest of the financial services industry.

“Nonetheless, the status quo is hardly sustainable. It is incumbent for us to consider how one can improve the way CRAs operate, or at least discuss how to mitigate the potential consequences of lapses a CRA could make in the future,” he said.

Delivering a statement on behalf of the Secretary-General, Wu Hongbo, Under-Secretary-General for Economic and Social Affairs said the role of credit rating agencies has expanded with financial globalization, reflecting the growing need to determine whether, and at what cost, governments and companies can access international financial capital.

The Secretary-General has just returned from the G20 Summit in St. Petersburg, where leaders adopted a Declaration calling on national authorities and standard-setting bodies to accelerate progress in reducing reliance on credit rating agencies. They also called for further steps to enhance transparency and competition among them.

“There are several broad challenges that the international community needs to tackle in order to ensure that credit ratings make a positive contribution to the stability of the international financial system and encourage the investment needed to promote sustainable development,” her said, noting the need to correct methodological flaws, improving transparency, guarding against conflicts of interest and enabling developing countries to benefit more from credit ratings. 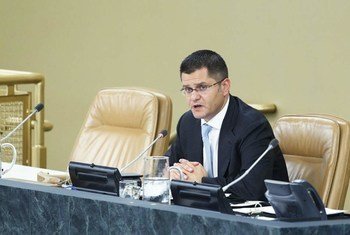 4 September 2013
One in five households in developing countries are now connected to the Internet but more must be done to bridge the digital divide with the developed world, the President of the General Assembly said today opening a discussion on boosting regional telecommunications transit routes.