UNHCR/ANSA
The death toll from the tragedy off Lampedusa stands at over 300, but searchers fear there may still be more.

11 October 2013
In the aftermath of a one of deadliest migrant-ship disasters in recent history, the United Nations refugee agency today urged wider responsibility-sharing among European Union countries to process asylum claims and find lasting solutions for people in need of international protections.

“With 311 confirmed deaths, that tragedy is already one of the deadliest incidents on recent record,” UN High Commissioner for Refugees (UNHCR) spokesperson Adrian Edwards told journalists in Geneva, referring to the tragedy that occurred last week when migrants aboard an overcrowded ship that had originated in Libya were killed when a fire caused a panic that led to the ship capsizing.

The UN agency welcomed comments earlier this week by the President of the European Commission, Jose Manuel Barroso, on the need for measures including strengthened capacity for rescue at sea, and better surveillance to track boats.

“It is important that all available means [are] used to mitigate the root causes of flight in refugee producing countries,” Mr. Edwards stressed.

More information is needed to be made available about the hazards of irregular sea movements to Europe.

In addition, there needs to be better gathering and sharing of information about the routes and means that people are taking in flight, as well as improved rescue at sea detection and response, and better care arrangements on arrival after their disembarkation, including improved facilities, he said.

Lampedusa currently faces “serious overcrowding,” the spokesperson said, with more than 1,200 people occupying facilities with the capacity of 250.

Asked if there was readiness by other European countries to take in any refugees currently staying in Lampedusa, Mr. Edwards said that some of them had already been moved from the island to other areas, but it was still early to predict how the situation would develop further.

Of the estimated 500 passengers on the boat, the majority are believed to be Eritreans, with at least 50 people remaining missing, the UN agency said.

The boat, which originated from Libya, caught fire half a mile from the coast, leading to the vessel capsizing. 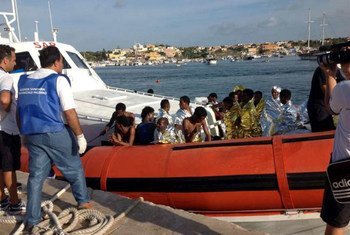 5 October 2013
The head of the United Nations labour agency today called for a revision of labour migration and border policies in the aftermath of a boat carrying an estimated 500 migrants capsizing off the Italian island of Lampedusa.