The Italian coastguard brings survivors of Thursday's tragedy to the harbour in Lampedusa. AMSA/UNHCR

5 October 2013
The head of the United Nations labour agency today called for a revision of labour migration and border policies in the aftermath of a boat carrying an estimated 500 migrants capsizing off the Italian island of Lampedusa.

The quest for better and safer livelihoods and decent jobs is taking on “more desperate proportions,” Mr. Ryder noted, calling for new ways to create more regular migration channels in collaboration with the real actors of the world of work – labour ministries, employers' and workers' organizations.

“This will require a profound policy shift in many countries,” Mr. Ryder said.

He highlighted the need for a much more refined balance between border policies and labour migration policies; more inclusive policymaking on migration, involving a broader range of ministries and stakeholders; and a huge effort on the part of governments, social partners and civil society, to change negative public perceptions.

The boat, which originated from Libya, caught fire half a mile from the Italian coast.

The UN Refugee Agency (UNHCR) had said the majority of the migrants were Eritrean. The bodies of more than 100 people have reportedly been recovered.

On the second and last day of the debate, participants honoured those killed in the incident with a moment of silence. Among them, Deputy Secretary-General Jan Eliasson, who later added his voice to the many others who had expressed shock and grief at the incident.

The UN Office of the High Commissioner for Human Rights (OHCHR) yesterday asked the Italian authorities and the international community, especially the European Union, to strengthen their efforts to prevent a repeat of this situation. 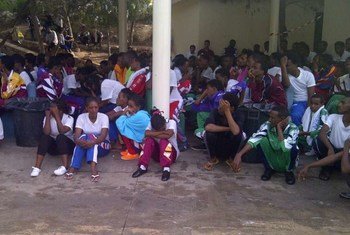 4 October 2013
The European Union (EU) should increase measures to prevent a repeat of yesterday's incident in which a boat capsized off the Italian island of Lampedusa killing dozens of African migrants, the United Nations human rights office said today.