Political prisoners in Myanmar must be released without conditions, UN expert stresses

A presidential amnesty decree on 8 October resulted in the release of 56 prisoners of conscience in the South-east Asian nation, which has been undergoing a reform process aimed at a more open and broad-based democracy. President Thein Sein has committed to release all political prisoners by the end of this year.

“I commend the Government for this latest amnesty, and celebrate the release of these people who had been unjustly imprisoned under the previous military Government,” said the UN Special Rapporteur on the human rights situation in Myanmar, Tomás Ojea Quintana.

He added that the releases are not only important for the victims and their families, but also for the ongoing process of democratic transition and national reconciliation.

“However, the release of prisoners of conscience is something that should be based on principle and should therefore occur immediately and unconditionally,” the expert said, while noting that the Code of Criminal Procedure enables the attachment of conditions to the discharge of prisoners, such as the imposition of the remaining sentence if the President judges that a condition of release has been broken.

“Administrative obstacles should also be removed which hinder former prisoners’ freedom to relocate to different states and regions in Myanmar, restrict them in running for public office, as well as hinder their acquisition of passports and professional work licences,” he said. “The release of prisoners of conscience must be without any conditions.”

In addition, he highlighted other cases that need to be included in the President’s commitment to release all political prisoners by the end of the year, including the four international non-governmental organization workers who have been arbitrarily detained in Buthidaung Prison since June and July 2012, and human rights defenders in Rakhine state.

Mr. Ojea Quintana will present his latest report on the human rights situation in Myanmar to the General Assembly in New York later this month. 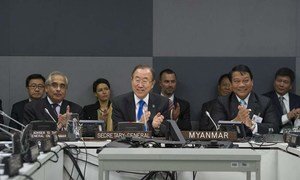 Commending Myanmar for its remarkable progress, Secretary-General Ban Ki-moon today stressed that the South-east Asian country must continue its democratic transition and overcome the inter-communal violence that is threatening it.