26 September 2013
Commending Myanmar for its remarkable progress, Secretary-General Ban Ki-moon today stressed that the South-east Asian country must continue its democratic transition and overcome the inter-communal violence that is threatening it.

“Myanmar continues a journey towards a more open and broad-based democracy. Its robust civil society will play an increasingly crucial role as a bridge between government and citizens, in the process strengthening accountability, transparency and participation,” Mr. Ban told a ministerial meeting of his Group of Friends on Myanmar, which met on the margins of the 68th General Assembly in New York.

Mr. Ban praised President Thein Sein’s commitment to bring the country towards peace, democracy and an open market, as well as the recent release of various political prisoners. However, he warned that the security situation remains fragile, and called for measures to ease tensions in the country.

“Much of this progress could be undermined if the threat of communal disturbances and violent confrontation between religious and ethnic groups is not addressed effectively including by looking at the root cause of the conflicts,” he said.

Mr. Ban expressed hope that the positive engagement between the Myanmar authorities and armed ethnic groups will result in a nationwide ceasefire “very soon.”

He also called on authorities to protect the rights of minority communities, including the Rohingyas. Several waves of clashes between ethnic Rakhine Buddhists and Rohingya Muslims, the first of which occurred in June 2012, have affected hundreds of thousands of families in the country’s western region. Some 140,000 people, mostly Rohingyas, remain displaced in Rakhine and tens of thousands of others have fled by boat.

“The fears, vulnerabilities and suspicions of the minority community have yet to be fully alleviated, and addressing the grievances of the Rohingyas, including the question of their citizenship, will be of the utmost importance,” he said.

Mr. Ban reiterated the UN’s support for the Government of Myanmar, including through assistance for the 2015 elections, the rule of law, humanitarian assistance, socio-economic development, anti-corruption, police reform and judicial practice.

Ministers at the meeting highlighted that international support for Myanmar needs to be constructive and coordinated in a manner that would add value to the reform process. 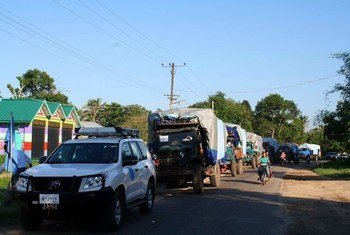 10 September 2013
The first aid convoy in nearly two years has delivered food, medicine and other supplies to thousands of displaced people in Laiza town in the eat of Myanmar’s Kachin state, the United Nations relief arm today reported.