8 October 2013
Hailing a time of renewed hope for the Middle East peace efforts, Secretary-General Ban Ki-moon today urged participants in a United Nations-backed seminar to keep up their efforts to increase dialogue and understanding in the region.

“Many of you, as journalists, activists, policy-makers and representatives of civil society, have played a vital role in promoting transparency, accountability and democracy,” Mr. Ban told the International Media Seminar on Peace in the Middle East Peace that began today in Istanbul, Turkey.

“I urge you to continue to advance peace and increase mutual understanding between communities, especially Palestinians and Israelis,” the UN chief added in a message delivered by Peter Launsky-Tieffenthal, head of the world body’s Department of Public Information (DPI).

The two-day seminar, organized by DPI and the Ministry of Foreign Affairs of Turkey, is part of an annual project established by the General Assembly in 1991 to look at the role of the media in advancing the peace efforts.

This year, the seminar follows the first meeting in more than a year of the members of the diplomatic Quartet on the Middle East peace process – the UN, the European Union, Russia and the United States – held on the sidelines of the UN General Assembly high-level debate.

“The Quartet statement makes it clear that it is determined to lend effective support to the efforts of the parties and their shared commitment to reach a permanent status agreement within nine months,” said UN Special Coordinator for the Middle East Peace Process, Robert Serry, in his keynote address to the seminar.

Mr. Serry, who participated in the Quartet meeting and several recent rounds of negotiations between the parties, said he harbours some hope but admits it is “very guarded.”

“It is now incumbent on the parties to sustain an enabling environment that offers a real chance for negotiations to move forward, take root, and achieve results,” Mr. Serry said. “As was also highlighted in the latest Quartet statement, both sides should take every possible step to promote conditions conducive to the success of the negotiating process and to refrain from actions that undermine trust or prejudge final status issues.”

He quoted Mr. Ban who had said that “Israelis and Palestinians must quickly see visible peace dividends,” and urged positive measures to bring tangible improvements to security and socioeconomic conditions for both sides.

On Gaza, Mr. Serry said the situation remains “precarious and non-sustainable”. In particular, he highlighted the “growing deficit of required electricity” which stems from obsolete power infrastructure and fuel shortages due to the closing of illegal tunnels.

“There is an urgent need for a safety net to ensure that continued provision of essential service,” he noted.

Turning to the participants, the senior UN official stressed that they have a “special role” to play in the peace efforts by bridging the divide to try and bring about a better understanding of the other’s narrative.

Throughout the seminar, participants will also hear from the Permanent Observer of Palestine to the UN, Riyad Mansour.

Emphasizing the seminar’s focus on the media and its role in the search for Middle East peace and the question of Palestine, Mr. Launsky-Tieffenthal said the panel discussions are an opportunity for representatives of the media and of civil society from the region and beyond to come together to share their experiences and exchange their views. 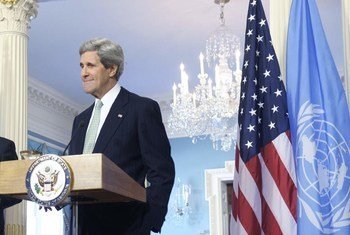 30 July 2013
The United Nations and its diplomatic partners in the Middle East Quartet today welcomed the resumption of direct talks between Israelis and Palestinians, with senior negotiators from both sides meeting in Washington to begin final status negotiations.