7 October 2013
Although global food prices have recently stabilized, they are expected to remain volatile over the next few years, the head of the United Nations Food and Agriculture Organization (FAO) said today, as a ministerial meeting on global food prices kicked off in Rome.

FAO Director-General José Graziano da Silva told the meeting, which coincided with the opening of the Committee on World Food Security, that this year’s session was taking place in a less troubled climate than a year ago, when ministers came together in response to the third spike in international grain prices in five years.

“The outlook for international food commodity markets finally looks calmer this year,” he told the meeting, which was attended by some 30 agriculture ministers. “Grain production has rebounded and higher stock-to-use ratios should bring greater stability to prices.”

And while the FAO Cereal Price Index is 20 per cent lower than it was one year ago, this is not the time for complacency, he stated.

“International prices have declined but they are still above their historical levels. And prices are expected to remain volatile over the next years,” he warned.

Mr. Graziano da Silva urged countries to take advantage of the relative calm to prepare for future market turbulence and find lasting solutions to the issues surrounding food price volatility. “If higher and volatile prices are here to stay, then we need to adapt to this new pattern.”

The two critical issues for countries to address are how to help poor small-scale farmers benefit from the higher food prices, and how to protect low-income families who suffer as a result of them, he said.

“The current situation offers an opportunity for farmers to reinvest in agriculture,” he continued, calling for a right set of policies to ensure that small-scale farmers have the means to take advantage of it.

The Committee on World Food Security (CFS), which runs until 11 October, opened today amid urgent calls to build more effective links between international policies and the daily needs of millions of the world’s most vulnerable people.

“The latest estimates signal there are nearly 30 million less hungry people in the world in 2013, compared to last year,” Mr. Graziano da Silva said at the opening. “And we continue to progress towards achieving the Millennium Development Goal hunger target of reducing by half the proportion of the undernourished population between 1990 and 2015.

“I see many challenges ahead of us, but also progress and successful experiences that we can build on,” he added. “We are convinced that working together is the only way forward.”

“Poverty and hunger go hand-in-hand and poverty runs deepest in rural areas,” said Kanayo F. Nwanze, President of the International Fund for Agricultural Development (IFAD). “Let us not forget that rural areas are a key element of any new development agenda and global food security. Let us not forget that investing in smallholder agriculture is the most cost effective way for developing countries to tackle poverty and hunger.”

Ertharin Cousin, Executive Director of the World Food Programme (WFP), said the world needs a strong and effective CFS. “Together, we shoulder an enormous responsibility, but our burdens weigh nothing in comparison to the suffering of the 840 million chronically undernourished people depending on us to get it right.”

In a message delivered by his Special Representative for Food Security and Nutrition, David Nabarro, Secretary-General Ban Ki-moon called the Committee “the point of reference” for all who seek to achieve the goal of eliminating hunger through collaboration with governments, social movements, farmers’ organizations, business and the research community.

“Working with a spirit of trust and mutual accountability, multiple actors are collaborating to address some of the thorniest issues of food security: land tenure; climate change; food price volatility; biofuels; and responsible investment in agriculture,” he noted.

The week-long session will feature two round tables: on biofuels and food security, and investing in smallholder agriculture for food security and nutrition. 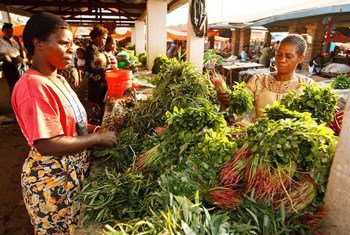 1 October 2013
Some 842 million people – roughly one in eight – suffered from chronic hunger in the period from 2011 to 2013, the vast majority of them in developing regions, says a new report released today by the three United Nations food agencies.