3 October 2013
The global supply of cereal this year will surpass the 2012 level by nearly eight per cent, the United Nations food agency reported today, as it also announced a drop in global food prices for the fifth consecutive month.

In its Crop Prospects and Food Situation report, the Food and Agriculture Organization (FAO) said the increase is mainly the result of an 11 per cent anticipated expansion in coarse grains output. The report coincides with the release of the agency’s monthly index, showing a drop in global food prices for the fifth straight month.

The United States, the world’s largest maize producer, accounts for much of the increase, as it is expected to harvest a record maize crop of 348 million tonnes, 27 per cent higher than the previous year.

International trade in cereals is also expected to increase in the 2013-2014 period due to the availability of coarse grains, reaching 312 million tonnes. This is 1.6 per cent higher than the previous period and slightly above the level expected in September.

The quarterly report also highlights several ‘food insecurity hotspots.’ Among them is Syria, where due to the protracted conflict some 4 million people are in need of humanitarian assistance.

The Democratic People’s Republic of Korea is another area of concern, as an estimated 2.8 million people require food assistance until the next harvest in October.

Other food insecure regions include northern Mali, the Central African Republic, the Democratic Republic of the Congo, Somalia, Sudan and South Sudan, where food availability has been hindered by conflict.

In Southern Africa, drought conditions in western parts resulted in a decline in cereal production and in higher prices in 2013, causing a rise in the number of food insecure, particularly in Namibia.

In Zimbabwe, maize production declined by about 18 per cent from last year’s below average level, and FAO forecasts that this drop in supply will render some 2.2 million people food insecure.

The Food Price Index, which measures the monthly change in the international prices of a basket of 55 food commodities. The Index averaged 199.1 points last month, one per cent below its August value. It is down 11 points or 5.4 per cent since the beginning of the year.

The Index dropped for the fifth month in a row in September, driven by a sharp fall in the international prices of cereals. The prices of dairy, oils, meat and sugar rose slightly. 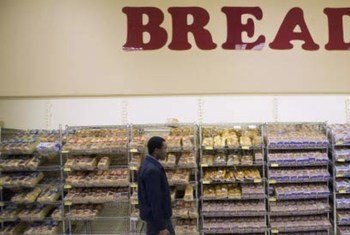 5 September 2013
Global food prices dropped to their lowest levels since June 2012 driven by continued declines in prices of cereals and oils, the United Nations Food and Agriculture Organization (FAO) reported today, while also forecasting a bumper harvest for this fall.