He added that despite international efforts calling for human rights protection and promotion, some developing countries are targeted “selectively.” Against such a backdrop, he urged rejecting high-handedness and arbitrariness routinely practiced by a “specific State” and which undermined peace and security.

The Vice-Minister went on to call for an end to “politicization, selectivity and double standards” in UN human rights forums led by the interests of the West and the western standards values.

In this context, Mr. Pak urged UN reform, particularly of the membership and scope of responsibilities placed in the UN Security Council.

The ability to use sanctions and force “should be made effective only under the authority and approval of the UN General Assembly,” the he told the world body on the seventh and final day of its high-level debate.

“Sustainable development and real protection of human rights are beyond imagination as long as there is no peace and security ensured as stipulated in the UN Charter,” he urged.

Turning to the situation in the Korean peninsula, Mr. Pak stressed that DPRK remains committed to putting an end to the tensions through dialogue and negotiations. He emphasized the repeated vicious cycle of mounting tension on the peninsula is rooted in the “hostile policy of the United States [towards] the DPRK.” That policy must end, and the US should, among others, respect his country’s sovereignty, lift sanctions, and immediately dismantle the outdated “UN Command.”

“Reunifying the country is a long-cherished desire and the most pressing task of the Korean nations,” he said, adding that Pyongyang “will work, hand in hand, with anyone who truly wants reunification, reconciliation and prosperity.”

In his statement, Mr. Pak also highlighted nuclear disarmament, saying that it is the “unanimous demand” of the international society, “nuclear disarmament negotiations should commence without further delay to work on universal instruments legally codifying the negative security assurances and prohibition of use of nuclear weapons.” 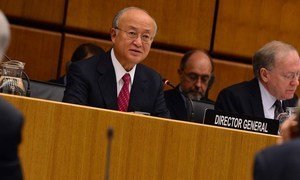 The head of the United Nations atomic energy agency today stressed the need for both Iran and the Democratic People’s Republic of Korea (DPRK) to cooperate in resolving outstanding issues regarding their nuclear activities.