1 October 2013
The dignity and transcendence of every single person should be the ultimate consideration as Member States lay the groundwork for new development goals for the period after 2015, the Secretary for Relations with States of the Holy See said at the United Nations today.

The dignity and transcendence of every single person should be the ultimate consideration as Member States lay the groundwork for new development goals for the period after 2015, the Secretary for Relations with States of the Holy See said at the United Nations today.

The goals must “allow a dignified life for all human beings, from the oldest to children still at the maternal bosom,” Dominique Mamberti said, quoting Pope Francis as he addressed the General Assembly plenary on the final day of the high-level general debate of its 68th session.

In the interest of such universal and integrated human development, he said, the development agenda for the post-2015 period should start from strengthening the basic unit of stable and sustainable development – the family, based on the union of woman and man and the protection of their rights.

For universal solidarity, it was also important to create shared goals that would bring together all Member States. In that light, he called for a more open, inclusive negotiation process in efforts to reform international financial institutions.

In addition, he said that better mechanisms were needed to monitor the achievement of development goals and to tailor economic policy toward obtaining concrete results in eliminating world hunger and promoting socioeconomic development.

The new development agenda would be incomplete if peace was not addressed, he said, stressing that war, terrorism, organized crime and other forms of armed violence were the first obstacles to development.

On Syria, he called on leaders to abandon military solutions and instead pursue a peaceful resolution to the conflict. Calling for the protection of all human rights, he said, the Christian minority in Syria should not be forced to go into exile.

The concept of the responsibility to protect was very important to the Holy See, he said, but too much emphasis has been placed on taking up arms to protect civilians once conflicts had started, instead of preventing bloodshed that threatened on the horizon.

A peaceful, lasting resolution of the Syrian conflict would create a significant precedent for the present decade, setting the international community on the path to avoid further conflict and honouring the responsibility to protect, he said. 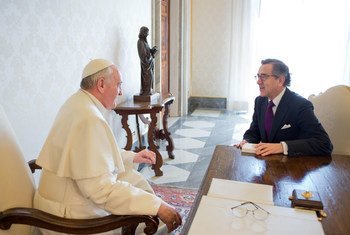 13 April 2013
The president of the Economic and Social Council (ECOSOC), Néstor Osorio, met today with newly elected Pope Francis to discuss the global fight against poverty, the first time the head of the United Nations’ development body has ever met with a leader of the world’s 1.2 billion Catholics.