In addition, there are continued reports of gross human rights violations since the Séléka coalition seized power in March 2013, including the deliberate killing of civilians, acts of sexual violence against women and children, and the destruction and looting of property, including hospitals, schools and churches.

“While the international community has yet to engage in a concerted way to prevent atrocities in the Central African Republic, there is still time to take steps to halt the escalation of this crisis and the suffering of the population,” stated the UN Special Advisers on the Prevention of Genocide, Adama Dieng, and on the Responsibility to Protect, Jennifer Welsh.

“The breakdown of law and order and the apparent inability of the transitional authorities to exercise control over Séléka soldiers committing atrocities, could presage a deepening crisis and a return to large scale fighting. This, compounded with other risk factors, including religious tensions, has opened the door to the risk of atrocity crimes,” they said in a statement.

They also urged the international community to support regional initiatives by the African Union and the Economic Community of Central African States aimed at protecting the population and preventing further abuses.

Also, the Special Advisers welcomed the appointment on 25 September by the Human Rights Council of an Independent Expert to monitor the human rights situation in CAR and called for the establishment of an independent and impartial body to investigate all allegations of serious human rights violations.

They also underscored the need for any international or regional force deployed to the country to have a strong mandate for the protection of civilians.

“While the international community is deeply engaged with crisis situations around the world and with the crisis in Syria in particular, we must not forget other populations that are equally in need of protection,” they stated.

Meanwhile, the Office for the Coordination of Humanitarian Affairs (OCHA), said today that an assessment mission to north-west CAR last week – the first since March this year – found that 170,000 people had been newly displaced by recent fighting between former Séléka rebels and various armed groups.

“Civilians are caught in the middle of the fighting and are at the mercy of anyone with a gun,” said Amy Martin, the head of OCHA in the country. She added that the clashes had “instilled a deeply-rooted fear and mistrust among the population, and there are violent incidents every day.”

Teams from the UN Children’s Fund (UNICEF) are providing emergency assistance to around 5,000 families uprooted by the recent violence in the north-west, including safe water, tarpaulins, blankets, sleeping mats, mosquito nets, jerry cans, and soap.

The agency’s spokesperson in Geneva, Marixie Mercado, told reporters that the majority of the displaced are women and children who are now living in deplorable conditions with no access to safe water or shelter.

She added that the past nine months of lawlessness and insecurity have been disastrous for children in the CAR: measles outbreaks were reported almost everywhere in the country; at least 250,000 children had lost out on the previous school year; forced marriages and sexual violence against young girls were reportedly on the rise; and UNICEF estimated that some 3,500 children are associated with armed groups, up from around 2,000 prior to the conflict. 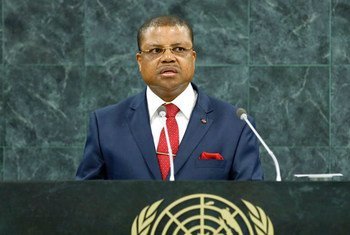 26 September 2013
Describing the humanitarian situation in his country as “catastrophic,” Central African Republic (CAR) Prime Minister Nicolas Tiangaye delivered an impassioned plea from the podium of the United Nations General Assembly today for full-scale international support to save his country from the internecine violence now tearing it apart.