26 September 2013
Describing the humanitarian situation in his country as “catastrophic,” Central African Republic (CAR) Prime Minister Nicolas Tiangaye delivered an impassioned plea from the podium of the United Nations General Assembly today for full-scale international support to save his country from the internecine violence now tearing it apart.

Describing the humanitarian situation in his country as “catastrophic,” Central African Republic (CAR) Prime Minister Nicolas Tiangaye delivered an impassioned plea from the podium of the United Nations General Assembly today for full-scale international support to save his country from the internecine violence now tearing it apart.

“Do not abandon us,” he declared, calling on the UN to play an increased role and accord the mandate, and the international community to provide the necessary financial, material and logistic support, for a beefed-up African Union (AU)-led force to restore peace and stability to a country that has known little of it for the past four decades.

“If the CAR collapses, new criminal and terrorist networks could establish themselves in the country and destabilize the whole region,” he warned.

The CAR, plagued by decades of instability and fighting, witnessed a resumption of violence last December when the Séléka rebel coalition launched a series of attacks. A peace agreement was reached in January, but the rebels again seized the capital, Bangui, in March, forcing President François Bozizé to flee. Mr. Tiangaye now heads a transitional national united government entrusted with restoring law and order and paving the way for democratic elections.

But armed clashes in the north-east of the impoverished country between ex- Séléka, elements loyal to Mr. Bozizé, and self-defence militias have increased since the beginning of August, with a serious deterioration in the situation of the population. “We must stress that the humanitarian situation at the moment is catastrophic,” Mr. Tiangaye said.

The entire CAR population of some 4.6 million people is affected by the crisis, 1.6 million have been driven from their homes, including 60,000 children who risk dying from malnutrition, at least 650,000 children cannot go to school, 484,000 people are suffering from severe food insecurity, and 3,500 children have been recruited into the armed groups, he added.

Some 13,700 with HIV/AIDS risk being deprived of their ant-retroviral treatment and less than 20 per cent of the country’s medical facilities are operational.

The planned AU-led force is projected to comprise some 3,650 military and civilian personnel. “Taking into account the scale of violence, the extent of the destruction, this multi-national force must be endowed with a clear and strong mandate from the UN Security Council with a mission to restore security and peace to the country and protect the civilian population,” Mr. Tiangaye declared.

“And the international community has the obligation to provide it with financial, material and logistical means to confront the numerous challenges that my country faces.”

Every day that passes brings its toll of blood spilled, women raped, minors kidnapped and thousands of people internally displaced or seeking refuge abroad. “It is today more than ever that action must be taken without hesitation to aid a people in danger, it is today more than ever that all means used elsewhere must be mobilized here to prevent the irreparable,” he declared.

“It is under your eyes that this human tragedy is being played out and it demands an urgent reaction.”

Mr. Tiangaye is one of scores of leaders to speak at the annual General Assembly session at which heads of State and Government and other high-level officials will present their views and comments on issues of individual national and international relevance. 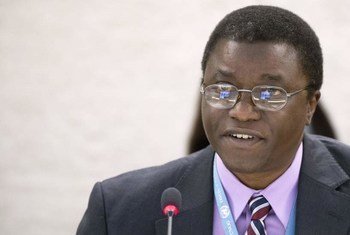 24 September 2013
An independent United Nations human rights expert today called for the urgent protection of civilians uprooted by the current crisis in the Central African Republic (CAR) which is marked by a virtual lack of security, massive displacement and a dire humanitarian situation.