Some 842 million people – roughly one in eight – suffered from chronic hunger in the period from 2011 to 2013, the vast majority of them in developing regions, says a new report released today by the three United Nations food agencies.

The number is down from 868 million reported for the 2010-12 period, according to the State of Food Insecurity in the World (SOFI 2013), published by the Food and Agriculture Organization (FAO), the International Fund for Agricultural Development (IFAD) and the World Food Programme (WFP), all of which are based in Rome.

The agencies said in a news release that continued economic growth in developing countries has improved incomes and access to food. Recent pick-up in agricultural productivity growth, supported by increased public investment and renewed interest of private investors in agriculture, has improved food availability.

In some countries, remittances from migrants are playing a role in reducing poverty, leading to better diets and progress in food security. They can also contribute to boosting productive investments by smallholder farmers, the agencies noted.

“Despite the progress made worldwide, marked differences in hunger reduction persist,” they stated.

For example, sub-Saharan Africa has made only modest progress in recent years and remains the region with the highest prevalence of undernourishment, with one in four people estimated to be hungry.

Meanwhile, no recent progress is observed in Western Asia, while Southern Asia and Northern Africa witnessed slow progress. More substantial reductions in both the number of hungry and prevalence of undernourishment have occurred in most countries of East Asia, South-eastern Asia, and in Latin America.

The report stressed that developing regions as a whole have made significant progress towards reaching the target of halving the proportion of hungry people by 2015, one of the targets set by world leaders as part of the Millennium Development Goals (MDGs).

If the average annual decline since 1990 continues to 2015, the prevalence of undernourishment will reach a level close to the MDG hunger target, it added.

A more ambitious target set at the 1996 World Food Summit to halve the number of hungry people by 2015, “remains out of reach at global level,” even though 22 countries had already met it by the end of 2012, said the agencies, while urging countries to “to make considerable and immediate additional efforts” to meet the both sets of targets.

“With a final push in the next couple of years, we can still reach the MDG target,” wrote the heads of FAO, IFAD and WFP, José Graziano da Silva, Kanayo F. Nwanze and Ertharin Cousin in their foreword to the report.

They called for nutrition-sensitive interventions in agriculture and food systems as a whole, as well as in public health and education, especially for women.

The report, whose findings will be discussed by governments, civil society and private sector representatives at next week’s meeting in Rome of the Committee on World Food Security, also presented new indicators for every country to capture the multiple dimensions of food insecurity.

♦ Receive daily updates directly in your inbox - Subscribe here to a topic.
♦ Download the UN News app for your iOS or Android devices.
food|Security 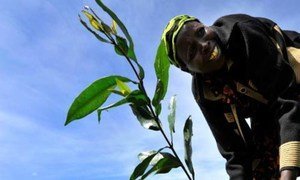 Strengthening ecosystems is key to helping local farmers in Africa adapt to climate change and ensuring that they produce enough food to meet people’s nutritional needs, participants decided at the end of an international United Nations-organized conference in Kenya.