He reported that Mali is now on the rebound thanks to UN and international efforts to restore order following a military coup d’état, fighting with Tuareg rebels and the seizure of its northern territory by radical Islamists during the past two years, and thanks to all the countries including France, Morocco and Chad who sent troops or otherwise supported the campaign to eliminate the “Jihadist terrorist aggression” from his struggling West African nation.

But despite the hopes raised by these various operations, “the displacement of small terrorist and rebel groups to other neighbouring countries represents as serious threat for the stability and territorial integrity of Mali and for peace and security in the region,” he warned.

“Mali under my leadership is resolutely determined to strive for strengthening existing sub-regional mechanisms for cooperation. Likewise, full support from the international community will prove indispensable in the battle against transnational terrorism in the Sahel (sub-Saharan region).

“The stakes are enormous and the terrorist threat is assuming worrying proportions, to the point that no country is protected from violent and barbarous acts,” he added, citing the recent deadly attack against a shopping mall in Nairobi, Kenya by Somali militants.

Mr. Keita said the problems afflicting Mali are “symptomatic of the challenges confronting all the countries in the Sahel region, notably the worst forms of organized cross-border crime, including trafficking in drugs, human beings and all kinds of arms, some of them very sophisticated weapons pouring in from Libyan arsenals after the fall of regime there.”

On other matters Mr. Keita welcomed the theme of this year’s 68th General Assembly - The Post 2015 Development Agenda: Setting the Stage! - which seeks to draw up an even more ambitious blueprint to totally eliminate poverty and its attendant ills in the decades following the end in 2015 of the current Millennium Development Goals (MDGs) cycle.

Mr. Keita announced that his country will hold two rounds of legislative elections before the end of the year; the first will be on 24 November and the second will be held on 15 December.

He also called for UN reform, including enlargement of the 15-member Security Council, whose resolutions alone are mandatory, and greater empowerment of the 193-member General Assembly, whose decisions do not have legal force.

Deputy Prime Minister Mohamed Bazoum of neighbouring Niger also warned of the terrorist threat in the Sahel. “Regional and international cooperation must urgently be put in place to provide security to the whole Sahel-Saharan region, notably through vigorous measures in the struggle against drug trafficking and overall cross-border organized crime,” he said.

He noted that the region suffers from major deprivations and is vulnerable to the effects of climate change, desertification, recurring droughts and malnutrition.

“It needs considerable investment within the framework of a global strategy backed by the whole international community to ensure the economic progress that is critical for its stabilization and liberation from the grasp of the perpetrators of violence,” he said. 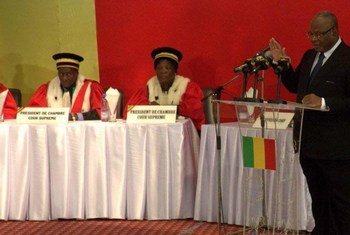 6 September 2013
Mali’s new leadership is forming a new Government today, a process started with the swearing in of the new President, Ibrahim Boubacar Keita, an event noted by the United Nations peacekeeping mission in the country.