Mali’s new leadership is forming a new Government today, a process started with the swearing in of the new President, Ibrahim Boubacar Keita, an event noted by the United Nations peacekeeping mission in the country.

Mr. Keita took the oath of office on Wednesday, with an inauguration celebration scheduled to take place in the capital, Bamako, on 19 September.

The Multidimensional Integrated Stabilisation Mission in Mali (MINUSMA) noted the swearing-in as a major political milestone in Mali.

Shortly after his election, Secretary-General Ban Ki-moon congratulated Mr. Keita, as well as the people of Mali, and acknowledged the concession of the second place candidate Soumaïla Cissé, saluting his commitment to democratic principles.

The elections were seen as an important step on the path to recovery for Mali. Since early 2012, the country has witnessed a military coup d’état, renewed fighting between Government forces and Tuareg rebels, and the seizure of its northern territory by radical Islamists.

In April, the Security Council approved a 12,600-strong MINUSMA, authorizing the blue helmets “to use all necessary means” to carry out security-related stabilization tasks, protect civilians, UN staff and cultural artefacts and create the conditions for provision of humanitarian aid.

MINUSMA’s core task is to support the political process in Mali, in close coordination with the African Union (AU) and the Economic Community of West African States (ECOWAS).

In accordance with this mandate, MINUSMA provided technical and logistical assistance for the 11 August run-off election, as well as for the first round of voting held on 28 July, in addition to support to the Malian security authorities.

Mr. Ban has reiterated the UN’s commitment to accompanying Mali in its stabilization and peace consolidation process, including through support for the yet-to-be-scheduled national legislative elections.

Mr. Keita’s Government has chosen Oumar Tatam Ly as the Prime Minister, taking over from interim premier Diango Cissoko. The Government is now reportedly working on the process of selecting ministers. 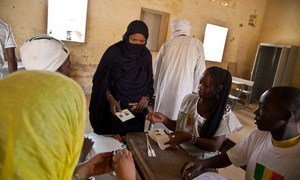