On the front line of damage wrought by climate change, threatened with extinction from rising seas, leaders of some of the world’s small island States took to the podium at the United Nations General Assembly today to call urgently for greater international support to mitigate the perils.

“Disastrously off course,” “profound disappointment” and “moral failure” were some of the terms used by heads of Small Island Developing States, known as SIDS, to depict their situation as the 68th General Assembly prepares to draw up long-term development plans for the decades after the end in 2015 of the current cycle of the anti-poverty Millennium Development Goals (MDGs).

“The corresponding actions to address the unique and special circumstances of SIDS by the international community has been lacking,” the Prime Minister of Antigua and Barbuda, Winston Baldwin Spencer, told the Assembly’s annual General Debate, summing up the almost two decades since the Barbados Programme of Action was adopted by at a UN conference on the sustainable development of SIDS in 1994.

“It is a recognized fact, but it is worth repeating that small island States contribute the least to the causes of climate change, yet we suffer the most from its effects. Small island States have expressed our profound disappointment at the lack of tangible action,” he said referring to efforts in UN climate change talks to protect SIDS and other vulnerable countries.

“Developed countries should shoulder their moral, ethical and historical responsibilities for emitting the levels of anthropogenic greenhouse gases into the atmosphere. It is those actions which have now put the planet in jeopardy and compromised the well-being of present and future generations,” the Caribbean leader stressed. 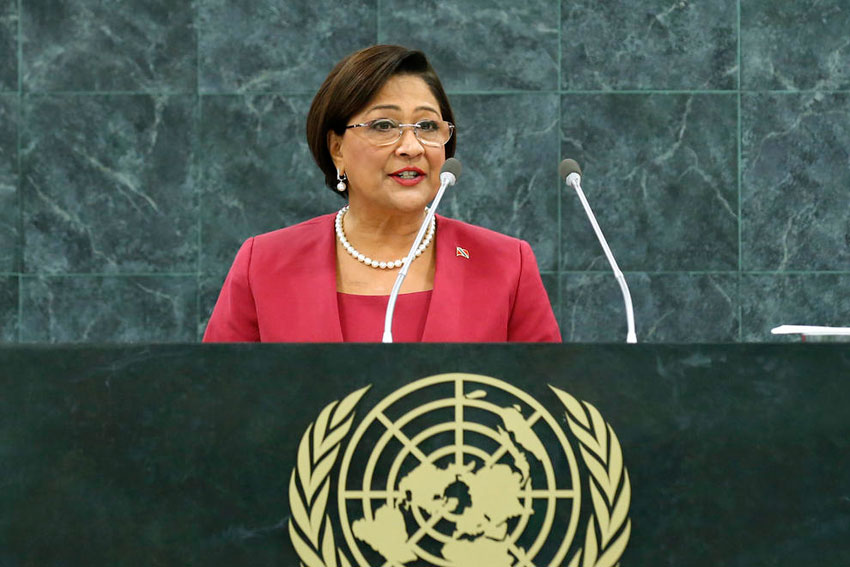 Noting uneven progress in achieving the MDGs, Prime Minister Kamla Persad-Bissessar of Trinidad and Tobago, who is also chairperson of Conference of Heads of State and Government of the Caribbean Community (CARICOM), warned that current approaches will not advance the MDG agenda by 2015 or ensure sustainable development in the post-2015 context.

“SIDS have made significantly less progress in the area of development, than other vulnerable groups of countries. In some cases SIDS are on the frontlines of experiencing a reversal of many of the gains that have been achieved,” she said.

“Indeed in the preparations for our participation in that upcoming discourse (on the Post-2015 Development Agenda), the recognition of the vulnerabilities of small island developing States is one of the guidelines that CARICOM will apply when considering its commitments to the overall Agenda.” 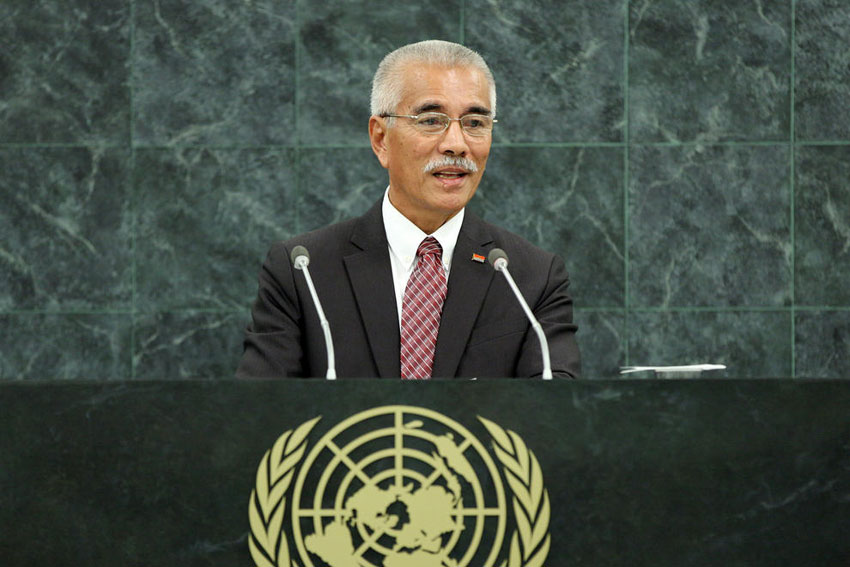 Anote Tong, President, Head of Government and Minister for Foreign Affairs of the Republic of Kiribati. UN Photo/Ryan Brown

From the other side of the planet, Kiribati President Anote Tong, stressing the “real and existential threat” his low-lying Pacific nation faces from rising seas, called for immediate international action to mitigate climate change and rising sea levels.

“We are disastrously off course. The scientists tell us that calamity awaits – and not just for those of us on low-lying islands,” he said. “What we are experiencing now on these low-lying atolls is an early warning of what will happen further down the line. No one will be spared. We cannot continue to abuse our planet in this way. For the future we want for our children and grandchildren, we need leadership.

“We need commitment. And we need action ....now,” he declared, noting that while Kiribati is taking adaptation measures to remain habitable for as long as possible, it is also looking to improve its people’s skills to a level where they can compete for jobs in the international labour market with dignity if the rising ocean forces them to migrate.

“All those countries with the ability to do so must contribute to the prevention of this calamity, or be forever judged by history.” 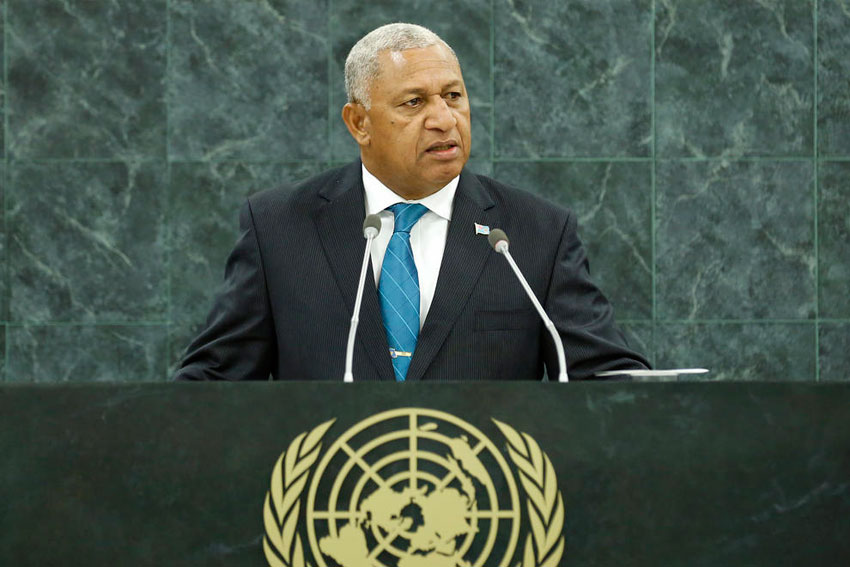 Fijian Prime Minister Josaia V. Bainimarama said an international conference next year in Samoa on the sustainable development of SIDS is a critical opportunity for the international community to renew its commitments.

“Not only are SIDS acutely vulnerable to the effects of climate change, such as sea-level rise, ocean acidification and the increased frequency of extreme weather events, but for some of us, the threat is to our very existence,” added Commodore Bainimarma, current chairperson of the Group of 77 and China, a bloc of developing States established in 1964 which now comprises more than 130 countries, some two thirds of the UN membership and over 60 per cent of the world’s population.

“Our response to the plight of those most at risk must therefore be characterised by a requisite sense of urgency.” 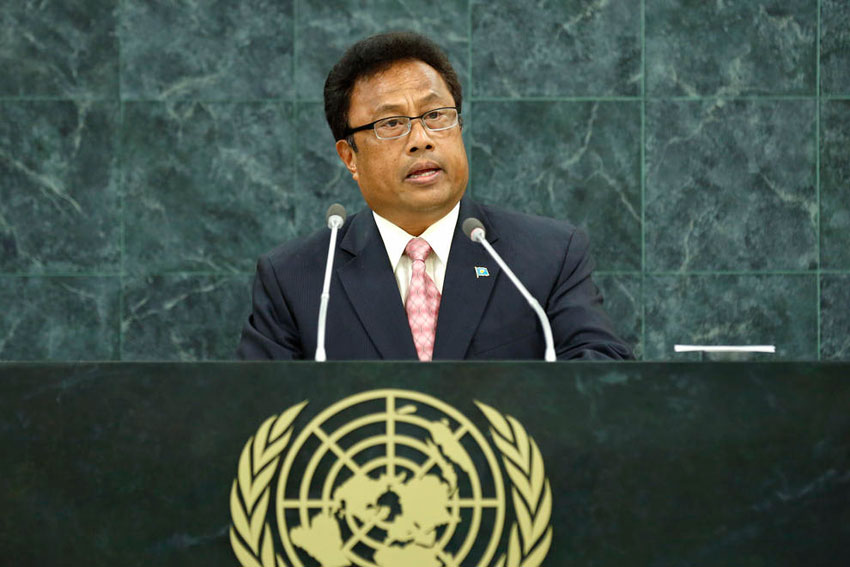 President Tommy Remengesau of Palau drew on his own personal experiences and his country’s flag - a yellow full moon against a blue ocean that represents nature's balance and harmony through the consistency of the rising and falling tides - to illustrate the depths of the problems stemming from climate change.

“Just before I left for this year's [General Assembly], during a full moon high tide, my back yard, which nestles against the ocean, flooded,” he said. “Typhoon Usagi, just a few days later, passed through the Pacific and landed in Asia, killing many people. This was followed almost immediately by Tropical Storm Pabuk.

“Mr. President, when I was a child, my back yard did not flood - and we did not have tropical storm after tropical storm pass through our Pacific islands. It is thereof clear to me and other Pacific leaders that the full moon and the ocean are no longer metaphors for balance and harmony. Today they represent imbalance - from our past excesses.”

Stressing that the primary responsibility to reduce greenhouse gasses still rests with the developed nations, he warned: “Our Global Warming doomsday is already set in stone if we fail to act.” 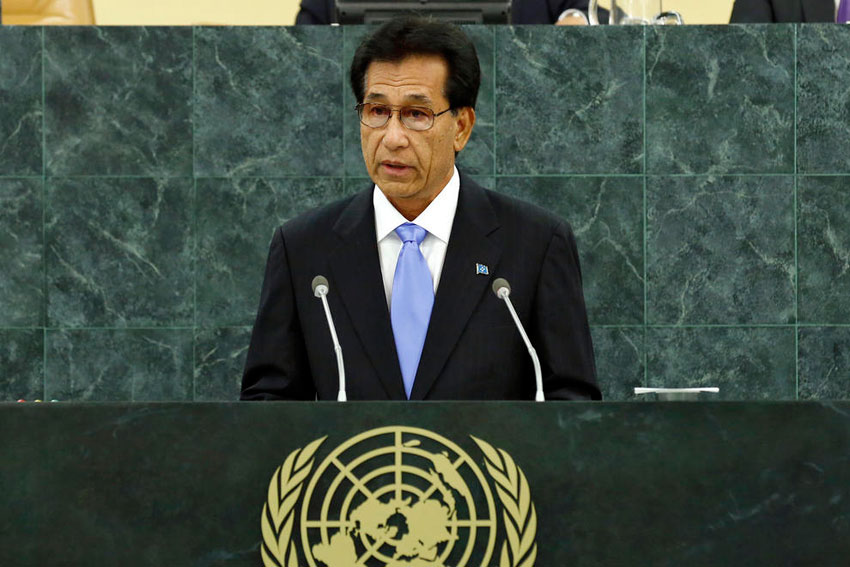 Emanuel Mori, President and Head of Government of the Federated States of Micronesia. UN Photo/Eskinder Debebee

President Emanuel Mori of the Federated States of Micronesia underlined the impossibility of separating development and the environment, noting that no country can develop its economy without degrading its natural environment to some significant degree.

“Climate change is, without question, the gravest threat to my people's welfare, livelihoods, and general security,” he said. “It is the survival issue of our time. Our sustainable development is threatened by the harmful effects of excessive greenhouse gas emissions in the atmosphere, effects which poison our root crops, destroy our reef systems, and drive many of our people from their ancestral homes.

“All of us, developed and developing countries, have a stake in finding ways that minimize manmade damage to Mother Earth. Only the international community can effectively take up this cause,” he added, insisting that the comprehensive climate change treaty to be adopted in 2015 must impose legally binding commitments.

The officials from small island development countries are among a host leaders set to speak at the annual General Assembly session at which heads of State and Government and other high-level officials will present their views and comments on issues of individual national and international relevance. The Debate opened yesterday and concludes on 1 October.

With thousands of people in the Marshall Islands without access to safe drinking water, the head of the United Nations office for disaster risk reduction today warned that Pacific small islands are threatened by drought and need to incorporate mitigation measures into their national planning and risk assessments.