At UN, Rwandan President urges going ‘beyond business as usual’ in fight on poverty

At UN, Rwandan President urges going ‘beyond business as usual’ in fight on poverty

25 September 2013
World leaders must take an honest look at the universally accepted anti-poverty goals and commit to a new global partnership founded on mutual responsibility and trust, the President of Rwanda said at United Nations Headquarters.

World leaders must take an honest look at the universally accepted anti-poverty goals and commit to a new global partnership founded on mutual responsibility and trust, the President of Rwanda said at United Nations Headquarters.

The theme of this year’s 68th General Assembly is the post-2015 development agenda, aimed at drawing up an even more ambitious blueprint to totally eliminate poverty and its attendant ills in the decades following the end of the Millennium Development Goals (MDGs) cycle.

Speaking at the high-level debate, President Paul Kagame urged other world leaders to “have the courage to go beyond business as usual” in laying out an ambitious vision for the future.

In his statement, Mr. Kagame, who is also the co-chair for the MDG Advocacy Group, established by Secretary-General Ban Ki-moon in 2010 to help build political will and mobilize global action for the benefit of the poor and most vulnerable, called for greater local ownership over development plans in future strategies.

“Now is the time for the developing world to make their vote and voices heard, to shape the debate, and to ensure that policies and programmes were demand driven,” the President said.

Rwanda, he noted, is on course to meet all eight of the MDGs but those are a “floor and not a ceiling.”

The eight Goals, adopted at the 2000 UN summit, aim to slash extreme hunger and poverty, boost access to health care and education, achieve gender equality and environmental stability, reduce maternal and child mortality and the incidence of HIV/AIDS, all by the end of 2015.

Mr. Kagame praised good governance, which inspired trust in state institutions, as the foundation for the country’s development.

The private sector plays a key role in creating prosperity, the Rwandan leader said, and greater investment in the country are needed. He highlighted structural reforms - such as roads, railways and airports - which can connect domestic markets to regional and global hubs, as well as need in energy and electricity.

Mr. Kagame is one of scores of leaders to speak at the annual General Assembly session at which heads of State and Government and other high-level officials will present their views and comments on issues of individual national and international relevance.

This year, the General Debate began yesterday and will end on 1 October. 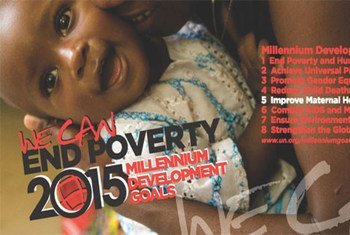 12 April 2013
Secretary-General Ban Ki-moon today rallied the United Nations community in a Call to Action, capping off a week of activities to spur accelerated progress in the 1,000 days to the end of 2015 – the target date for achieving the eight anti-poverty Millennium Development Goals (MDGs).