“I should reassure the international community that Libya is moving steadily and confidently with a solid will and a genuine desire towards the establishment of the rule of law in which the respect for human rights, fundamental freedoms and the peaceful transfer of power prevail,” Prime Minister Ali Zeidan told the 68th General Assembly high-level debate.

He added that Libya is also forging positive partnership with the international community, and working to promote peace “as stipulated by the United Nations Charter and international laws and norms.”

Turning to his neighbour countries, the Prime Minister called for the surrender of “wanted elements of the former regime” and who continue to engage in criminal activities which threaten Libya’s security and stability.

Among other factors threatening security of the country, Mr. Zeidan mentioned smuggling of narcotic drugs and mind-numbing substances, illegal immigration, and arms smuggling.

The Prime Minister also highlighted the importance of recovering funds looted from the treasury of the Libyan State and smuggled abroad. “From this podium, I urgently reiterate the call already sent to all States to cooperate with us and help us in detecting and recovering of those funds.”

Mr. Zeidan is one of scores of leaders to speak at the annual session at which heads of State and Government and other high-level officials will present their views and comments on issues of individual national and international relevance. The session started yesterday and ends on 1 October.

The theme of this year’s 68th Assembly is the post-2015 development agenda, aimed at drawing up an even more ambitious blueprint to totally eliminate poverty and its attendant ills in the decades following the end of the Millennium Development Goals (MDGs) cycle.

Noting that a number of African countries are facing challenges achieving the MDGs as a result of political and social instability, Mr. Zeidan urged the international community to assist countries emerging from conflict “by supporting their efforts to establish peace and security.”

In particular, through advising and enabling them to get the technology and scientific programmes and assistance they need to build their capacity in various fields. 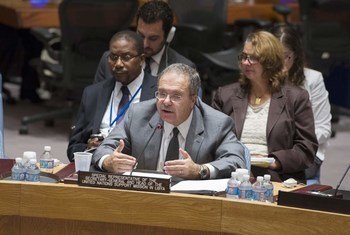 16 September 2013
Two years after the fall of the authoritarian regime, Libya faces a number of challenges in ensuring that its democratic transition proceeds peacefully, a United Nations envoy told the Security Council today, noting that recent months have been marked by pronounced political disagreements, a disruption of the country’s oil exports, and security problems.